For strategy on the Throne of the Four Winds encounter, see Al'Akir (tactics).

“Your challenge is accepted, mortals! Know that you face Al'Akir, Elemental Lord of Air! You have no hope of defeating me!”

Al'Akir the Windlord was the Elemental Lord of air. He ruled over his domain of Skywall from his seat at the Throne of the Four Winds. He was once the foremost tactician in the Old Gods' horrific armies.[2] Aligned with the corrupted Dragon Aspect Deathwing and his fellow Elemental Lord Ragnaros in their efforts to usher in the end of days, Al'Akir was defeated by the mortal champions of Azeroth, who were able to enter Skywall from the breach in Uldum and destroy the Windlord within his own sanctum. 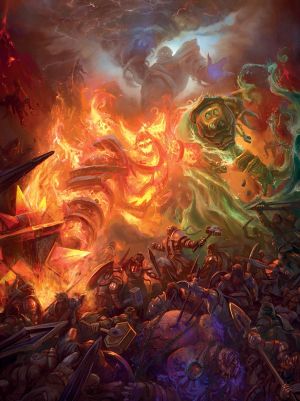 Al'Akir with the other Elemental Lords.

In the beginning, the world that would become known as Azeroth was ruled by the elementals. A nascent titan maturing within the world's core had consumed much of the fifth element, Spirit, and without this primordial force to create balance, the elements were thrown into chaos. The four Elemental Lords, who each ruled over innumerable lesser spirits, constantly clashed with one another on the surface of the primordial world. Al'Akir the Windlord was the most cunning of them all, sending his minions to spy on his enemies and sow distrust among their ranks. He would pit the other lords against each other, only to then unleash the full fury of his servants on his weakened foes, sending lightning and cyclones to ravage the world's surface.[3]

When the entities known as the Old Gods arrived from the Great Dark and established their empire, the Elemental Lords saw the invaders as a threat to their dominion. For the first time in Azeroth's history, the native spirits of the world worked together against a common enemy. Al'Akir's tempests joined with the fiery minions of Ragnaros the Firelord, creating blistering firestorms and cyclones of flame that reduced the Old Gods' citadels to ash. Eventually, however, the elementals of the world could not stand against the endless swarms of n'raqi and aqir, and were all enslaved.[3]

When the titan-forged arrived on Azeroth to battle the Black Empire, the Old Gods sent their enslaved Elemental Lord lieutenants to face them. Al'Akir waged war against Ra, Thorim and Hodir, who used their combined powers over the winds and storms to drive the Windlord back to his lair atop the highest peaks on Azeroth. Once there, the three keepers turned Al'Akir's own powers against him and defeated him atop his domain. The Windlord and his air elementals were thereafter imprisoned in the spires of Skywall, a region of the Elemental Plane.[3]

Thousands of years ago, the famed tol'vir smith Irmaat crafted a pair of magnificent handblades. Unsatisfied with his work, Irmaat tried to capture the essence of Al'Akir the Windlord to infuse into his blades. Al'Akir was not amused. To spite the smith, Al'Akir poured unspeakable amounts of raw elemental fury into the handblades. When Irmaat attempted to unleash their might, a great vortex sprang up, engulfed his city, and scattered the weapons to the winds.[4]

Immediately prior to The Shattering, the Elemental Lords discovered a way to break through their prison and send their armies into major cities throughout Azeroth.[5] Al'Akir ordered his lieutenant and herald, Prince Sarsarun, to collaborate with the Twilight Hammer in their invasions of Stormwind City and Thunder Bluff as part of the Elemental Unrest world event. These city assaults were then rebuffed by their defenders as Varian Wrynn and Cairne Bloodhoof led the charge against Sarsarun's hideout in the Ahn'Qiraj Terrace.[6] This was the first major loss for Al'Akir since Prince Thunderaan's defeat at mortal hands years ago and revealed the Windlord's new allegiance with Deathwing. 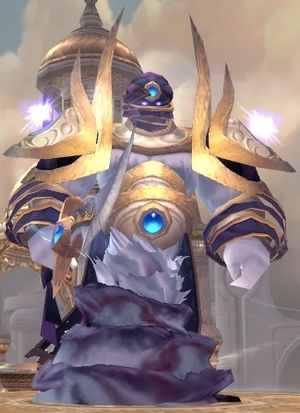 Al'Akir in World of Warcraft.

"Your challenge is accepted, mortals! Know that you face Al'Akir, Elemental Lord of Air! You have no hope of defeating me!"[7]

As the corrupted Dragon Aspect Deathwing recovered his strength, N'Zoth commanded Al'Akir to prepare for war, which the Elemental Lord relished. In return, N'Zoth promised to release him from his prison and let him roam free on Azeroth as the Windlord once did in ancient times.[8] Following Deathwing's Cataclysm of the World Pillar in Deepholm and his destructive re-emergence into Azeroth, the Elemental Plane collided with the physical realm and resulted in drastic geographical upheaval, causing chaotic elementals to pour out into the world of Azeroth.[5] The Skywall now floats ominously over the southern sands of Uldum.

Deathwing sought to manipulate the elemental lord of Skywall into accomplishing his goals by turning him against the Alliance, Horde and all mortal life.[5] He has become one of the Destroyer's staunchest and most powerful allies, and called the Conclave of Wind, ancient wind elementals nearly as powerful as Al'Akir himself, to aid in the elemental invasion of his former home.[9]

He assists Deathwing's efforts at reclaiming the Titans' ancient reorigination device and lends his elemental forces at crushing Uldum's native defenders and his old enemy, the Tol'vir. One of his first acts after the Cataclysm was destroying the inhabitants of Orsis in revenge for having refused Deathwing's offer of curing their Curse of Flesh.[10] The armies and strongest minions of Al'Akir still reside within the Vortex Pinnacle, training in formation and torturing tol'vir as they prepare to lash out yet again at Uldum.[11] At some point prior to his death, Al'Akir ensnared and twisted Hagara the Stormbinder with new powers for trying to bind elementals to her will.[12]

When players finally meet him in Throne of the Four Winds, he is as aloof as ever, but generally conducts himself more honorably in combat than his elemental ally Ragnaros. As Al'Akir is slain in his home plane, the Skywall, he is forever dead. This makes him the first of the Elemental Lords to die. What the death of their elemental lord means to the air elementals is currently unclear, but it most certainly is not good.[13]

Al'Akir's final words would prove ironic, for his death created such a power vacuum that the other air elementals would fight over their former lord's position for years to come. Of note, Typhinius attempted to use the Fists of the Heavens to forcefully take command of Skywall and continue Al'Akir's war against the Ramkahen, but failed miserably before being slain by a monk adventurer.[14]

[Thunderfury, Blessed Blade of the Windseeker] and used it to revive Al'Akir's true heir, Thunderaan the Windseeker, who then succeeded the Windlord as the ruler of Skywall. The new elemental lord pledged Skywall's armies to aid Azeroth's forces in the fight against the Burning Legion.[15] 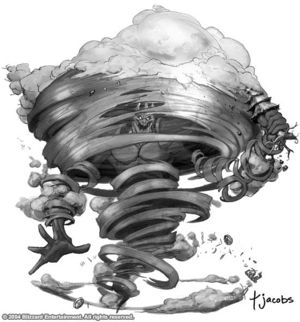 Al'Akir is absolute ruler over the skies, air and storms.[16] He is the weakest of the four Elemental Lords of the Old Gods. His domain is the sky over the Elemental Plane, which touches all of the other elements. Consequently, it "...interacts with them more than any other, and yet he is the most capricious and aloof of all the Lords. He is as likely to stir up trouble one day as he is to casually ignore incursions the next." His mood can quickly change, much like the weather.[17] He is revered by all air elementals and creatures that fly. It is said that he is aware of all air spells that are cast anywhere throughout the multiverse - although this might be true, he rarely becomes personally involved in their resolution unless they affect him directly.[16]

Al'Akir uses his great speed to his advantage in battle. He strikes first at those foes who fly and thus present the greatest challenge to his mastery of the air. Climbing into the sky to attack him can be a dangerous proposition. Once all flying foes have been dealt with, he generally employs his whirlwind ability to sweep up creatures on the ground, holding them as long as possible before dropping them in whatever manner deals the most punishment to those who would challenge his might.

Although he is the weakest of the Elemental Lords, the others are hard pressed to attack him on his own turf. He rarely attacks them directly, choosing instead to wreak whatever havoc he can before retreating in the face of determined opposition.[17]

Al'Akir has the power to transform himself into a tireless and raging thunderstorm when outdoors. This transformation completes within a relatively short time, "during which he swiftly shifts into a massive, roiling black" 250-foot by 250-foot by 1,000-foot "cloud bank with lightning dancing within." It can last up to one full hour, while also standing a few hundred feet off the ground. While within this form, he has greater power to manipulate the air, such as being able to loose multiple and powerful lightning bolts, each at a different target within approximately 500 feet in any direction he wishes. He also has the ability to slam creatures beneath him or within one hundred feet of the thunderstorm. Furthermore, he can create a single whirlwind underneath his cloud shape that must remain directly below his cloud body. If any other air elementals are in the vicinity, they also can form whirlwinds (at their own power level) that can last for as long as the thunderstorm. There are limits to these abilities; Al'Akir cannot use them with conjunction of the whirlwind, or with other whirlwinds caused by the wind elementals under his command.[18]

Al'Akir can transform himself into a whirlwind every 10 minutes, and remain in this form for a fairly long duration. Gargantuan or smaller creatures may be injured when caught in the whirlwind, and/or lifted into the air. A creature that can fly has a higher chance than others to escape the whirlwind. It too, will very likely be injured. He can eject any creatures whenever he wishes, depositing them wherever the whirlwind happens to be. He prefers doing this over the sides of cliffs, or from very high altitudes.

If the base touches the ground, it creates a swirling cloud of debris, known to most as a tornado. This cloud is centered on the elemental, and it will obscure all vision. It is difficult to cast a spell from near or within the tornado.[16]

Thunderaan, Prince of Air, and/or Prince Sarsarun may be children of Al'Akir, given their titles.