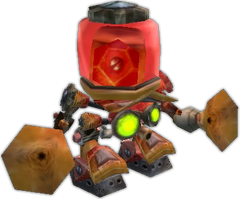 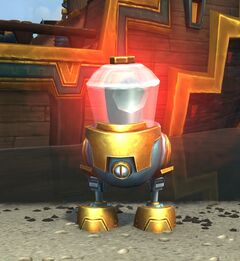 On Mechagon Island, a new type of alarm-o-bot can be seen. 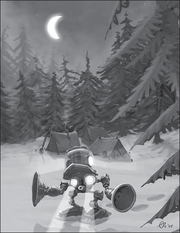 Gnomes live underground, and the natural darkness and rugged terrain of their surroundings provide ideal conditions for enemies to hide. In an effort to catch prowling and skulking creatures of all types, gnomes developed the alarm-o-bot. The small robot looks like a child's toy with various wires and sensor arrays jutting out in all directions, enabling it to “see” in the dark. When it detects a living creature or any sort of movement, it emits a high-pitched warning. The leper gnomes in Gnomeregan make heavy use of this device.

The alarm-o-bot's operator can program the device to either stand in place or walk a predetermined, simple path involving no more than four turns. The alarm-o-bot cannot maneuver around obstacles; if it encounters terrain more than a few inches higher or lower, it stops moving but remains vigilant. Setting up the bot, or changing its movement pattern, requires 5 minutes of programming and testing. The alarm-o-bot's detection abilities are entirely visual; it cannot detect sounds. The bot “sees” any motion, heat, or even unusual shifts in air currents, allowing it to detect invisible creatures or those shrouded in magical darkness. If it detects anything suspicious, it immediately shrieks “INTRUDER ALERT!” and flashes a bright red light for 30 seconds.

The screech and flare can be stopped only by destroying the alarm-o-bot, magically silencing or darkening it in some way, or if the owner uses a standard action to switch it off. Switching off a screaming alarmo-bot requires a DC 15 Use Technological Device check. The bot also issues its warning if it takes damage from any source but is not destroyed by that damage.

The alarm-o-bot can be set to ignore certain sizes of creatures, such as anything smaller than Tiny, or anything that isn’t Medium. Its heat or motion detection functions can also be switched off independently if desired. Finally, the owner can select a specific motion, such as a vigorous hand wave or repeated jumping, that acts as a “password” to cause the bot to not activate its alarm. This enables the owner to approach without being deafened.

The alarm-o-bot uses 1 vial of phlogiston for up to 8 hours of continuous use. However, issuing its alarm draws additional power, counting as 10 minutes off this time.[1]