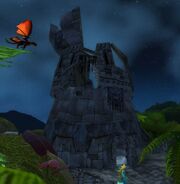 A shot of a destroyed Alliance tower on Alcaz Island.

The internment camp on Alcaz Island.

Alcaz Island is a large island off the northeast coast of Dustwallow Marsh. Unlike the rest of the zone, it features tropical vegetation similar to the nearby Echo Isles. It is inhabited mostly by undead gnomes and technological inventions led by Doctor Weavil. Formerly, it used to be a location full of Strashaz naga.

It is a no-fly area and nearing it on a flying mount will automatically dismount you.

While it is only a short swim from the coast, it can be rather dangerous since the monsters on and around the island used to be level 57-62 elite. And while the island has a dock, there are no boats around.

Under the surface of the island is a heavily guarded prison, where the missing king of Stormwind, Varian Wrynn was kept after his abduction by the Defias Brotherhood.

During the events surrounding the opening of the Gates of Ahn'Qiraj (in Patch 1.9), several changes occurred. A malicious gnome, Doctor Weavil arrived on the island with his flying machine, and now resides in the largest house of the island, guarded by several of his minions. At the same time, King Varian Wrynn disappeared from his prison cell. His former cell is now home to a naga called Tidelord Rrurgaz.

While you could attack Doctor Weavil, he had approximately 326K health, and after fighting him for about 15 seconds, he would mind control you and you would be his minion for two minutes. At that point he resumes his nap and, when the debuff expires, the fight starts over again. 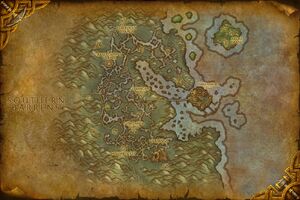 a bronze dragon, to see the land of the past and return to the present. She is located at the end of the bridge west of Theramore Isle.

During the third invasion of the Burning Legion to Azeroth, the defeated Doctor Weavil returned to Alcaz island and bumped up the security. Monsters there comprise a mechanical army of level 110 elites. Anti-air turrets will now shoot down anyone trying to fly near the island.

[Jewelhammer's Focus] (as part of the Tools of the Trade questlines introduced in Patch 8.1.5). The cave is an exact replica of the Primordial Observatory.

The subject of this section was removed from World of Warcraft in patch 7.1.0.

Once a human settlement, naga have taken over Alcaz Island and seem to be protecting something. Rumors abound, but so far no one has uncovered what the naga may be hiding. Alcaz was a small human village with an underground tunnel system, and presumably the tunnel system might be where the naga are hiding whatever it is they are guarding. Hydras also dwell off the coast; these may be native to the area, or the naga may have summoned them.[2]