This article is about the occupation. For the alchemist profession in World of Warcraft, see Alchemy. For the Warcraft III hero unit, see Goblin Alchemist (Warcraft III).

“An alchemist is able to work miracles with ordinary herbs, converting them into stable potions that range in effect from healing to breathing underwater and everything in between.”

An alchemist is one who takes the alchemy profession and is a potion master. They take on the positions of vendors, trainers, apprentices and masters. Alchemists come from different races of the Horde, Alliance, or an independent faction, as well as the pandaren, yaungol, Zandalari trolls and mantid race. There are also alchemists in the Scourge.

Plants have properties that allow alchemists to re-energize and reinvigorate others through potions.[1] They can be transmuters.[2] Shado-Pan alchemists can create gas bombs.[3] Some alchemists can craft an extract that will induce a vision.[4] Potent alchemy can be used to prevent insects from infesting fields of farmlands. As such, drogbar used to trade bug sprayers to the Highmountain tauren of the Rivermane tribe.[5]

Some chemists specialize in alchemy.

Goblins became excelent alchemists thanks to the kaja'mite ore.[6]

Goblin alchemists were seen during the Second War as well as in the aftermath of the Third War.

The maniacal and brilliant goblin alchemists are masters of volatile chemicals, explosives and strange mechanical devices.[7]

During the Second War, goblin alchemists adhered plates of adamantine steel to Deathwing.[8]

During the War Against the Nightmare, Stormwindian alchemists brew a potion that would help individuals sleep and keep immune against the Emerald Nightmare. Varian Wrynn took it.[11]

Thrall sent several Horde alchemists to Ashenvale to assist the night elves in looking over the site of the slaughter and examining the blood and clothing of which the Horde was accused. A dwarven priestess in Ironforge was an alchemist and she gave Anduin Wrynn an invisibility potion.[12]

Alchemists examined Sky'ree and confirmed that she is old instead of ill.[13] 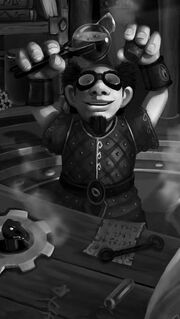 Many are those who know how to create the simplest items in the alchemist’s repertoire — small sticks with bits of alchemical gold that glow brighter than a torch when struck, vicious acids, and stones coated with a special dust that causes a loud explosion when struck against something solid. But these are only the basics of an elaborate and incredible art, easily as expansive as any form of spellcasting. Indeed, the simple alchemist’s fire and thunderstones are to the heights of alchemy what little cantrips are to the greatest forms of magic.

Many alchemists — at least, many alchemists who are also spellcasters — often find themselves drawn away to the “superior” art of potion-brewing. However, not all alchemists have that option. More than one skilled alchemist can cast no spells whatsoever, and many are the warriors among both the Forsaken and Night Elves who supplement their deadly skills with the heights of alchemical knowledge.[20]

Mechanical devices and steam technology are the latest attraction, leaving alchemy as "the old technology". Alchemists resent the disparaging tone that accompanies "old".[21]

Alchemy/alchemist is a craft and profession. One can become an arcane alchemist. Potion docs work differently than basic alchemist.