An Alchemist Stone is an improved version of the

[Philosopher's Stone], and also fulfills the requirement for performing Transmutations.

There are alternate versions of the Alchemist Stone listed in a related section below. 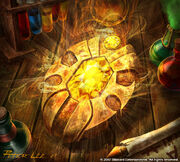 The recipe is sold by Almaador in Shattrath City for 8

. You need to be revered with the Sha'tar.

The usefulness of this item becomes more obvious when put into comparison with a regular +XX mana every 5 seconds bonus effect. Consider a long boss fight where you have to spend several

[Super Mana Potion] each time their cooldown (2 min) allows for. As the mana potion will normally replenish an average of 2400 mana and another 960 more with this Stone equipped, this basically translates into the equivalent of +40 mana every 5 seconds. However, since patch 3.0.2 potion cooldown does not start until combat is over, making the stone considerably less useful.

Using this trinket in conjunction with

[Fel Mana Potion] grants a restoration of 4480 mana over time at the cost of a slight debuff. Also notable is the

[Fel Regeneration Potion] where the debuff will negate the stat bonus of the trinket in exchange for 4480 health restored over time.