For lore on the alchemy profession, see Alchemist.

Alchemy is a primary profession that mixes herbs found by Herbalism and sometimes other reagents to generate elixirs, potions, oils, flasks and cauldrons with a variety of effects, as well as transmute minerals, gems, and elementals. Concoctions can be made to restore health and mana, grant temporary invisibility, grant temporary good luck through treasure finding, temporarily change appearance, temporarily improve statistics, and much more.

Alchemists use herbs to create strange, magical brews that heal, empower, and produce a variety of positive effects - invisibility, elemental resistance, mana restoration, and much, much more. They can also transmute mystic materials into rare and exotic new forms. With their power to create valuable consumables (one-use items), Alchemists are highly useful to groups and raids. By creating rare materials, Alchemists can make a great deal of money, enable the creation of powerful weapons and armor, and even influence the economy of Azeroth!

Most alchemical brews can be created anywhere, as long as you have the appropriate reagents - supplies that you can buy from vendors, trade for with other players, or find in the wild.

Alchemy is often paired with the gathering profession Herbalism, since herbs found in the wilderness are required to concoct the majority of alchemical mixtures.

As you advance further in the craft of alchemy, you'll be given an opportunity to choose a specialization. After completing a unique quest, you can specialize in either Transmutation, Potions or Elixirs. An Alchemist with a specialization has a chance to create bonus materials when working within their area of expertise.[1]

% Kul Tiran and Zandalari proficiency is only available after purchasing the expansion Battle for Azeroth.

Advancing as an Alchemist

The method in which Mists of Pandaria recipes are learnt is a little different. Only two recipes are available from alchemy trainers:

All Potions, Elixirs and Flasks will require a

[Crystal Vial], which can be purchased from any trade goods or Alchemy vendor.

Herbalism is not technically required, but is highly recommended as nearly every alchemy recipe requires Herbs to make, and herbalism can alleviate most of the cost of leveling up. Also, the wide variety of different herbs makes it difficult to simply purchase what you need from other players, because many potions will require more than one type of herb to make, and the herbs are often very expensive.

For details on what can be transmuted, see Transmute. 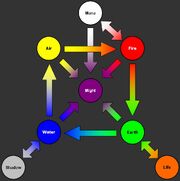 Alchemist's transmutations of various Primals into other Primals.

High-level alchemists can perform transmutations on gems, elemental materials, and some metals for use with other tradeskills. Arcanite, which is used in pre-TBC Blacksmithing recipes, cannot be mined – it can only be transmuted from

[Arcane Crystal], which is derived from Thorium. Similarly,

[Truegold] has no other source than alchemy. Many other transmutations are possible; see recipe lists.

Before an alchemist can perform any transmutations, he or she must create a

[Runed Copper Rod], this stone must be in the inventory or equipped to perform any transmutations. Making multiple Philosopher's Stones will not reduce the cooldown time. Philosopher's Stones are Soulbound and cannot be disenchanted, so it is not advised to create more than one. Higher level alchemists can replace their Philosopher's Stone with any Alchemist's Stone, such as the

(Previously, alchemy cooldowns required 24 hours and later 20 hours, but switched to a midnight reset system as of patch 4.0.1.) 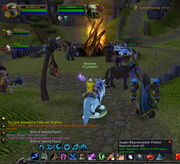 The discovery of a

Discovery is a mechanic used to learn certain alchemy and inscription recipes. You have a small chance every time you perform a transmutation or when you make a potion, elixir, or flask that was introduced in The Burning Crusade or Wrath of the Lich King. The recipe is learned automatically.

In Mists of Pandaria, almost all recipes are learnt through 'discovery'. The recipes

[Master Healing Potion] can be learnt from Alchemy trainers. When making these potions, you have a chance to learn other Pandaria alchemy recipes. Discovered recipes can also reveal additional recipes when created. However, you won't be able to learn some recipes until you reach the appropriate skill level. This is intended to provide each alchemist with a unique skill-levelling process.[2]

Upon reaching a Classic Alchemy skill of 300, trainers offer quests to learn one of three specializations:

Specializing gives players a chance to create an extra 1 to 4 (for a total of 5) items while crafting in the field you have selected. For example, a Master of Potions may be able to craft more than one

[Super Mana Potion] for the same material cost as one. For more details on the probability, see below.

To change a specialization in alchemy:

Once unlearned, alchemy trainers in major cities will offer you a choice of three quests, one for each specialization. The quests involve bringing rare materials to a alchemy trainer. eg.: 4

The specialization NPCs are:

Specializations can be changed as often as desired.

While the exact percentage of the specialization proc is unknown, people have speculated that this ability can happen as often as 10-25% of the time.

Alchemists gain a few perks as compared to other professions, namely the Mixology passive, reusable potions, and potions with combined instant health and mana regeneration.

[Mixology] ability, which doubles the duration and increases the effect of many flasks and elixirs when used by the alchemist.