Not to be confused with Alchemy Lab (garrison). 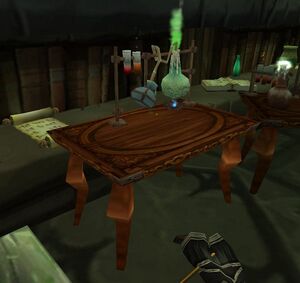 As of patch 3.0.8, Alchemy Labs are nearly relics of the past, as there are only two recipes left that still require one: the

[Mercurial Stone] and the

[Alchemist Stone]. This was originally used by Jewelcrafters to make

[Mercurial Adamantite]; however, it is no longer required and is now a trinket (as of Patch 3.0.9). Alchemy labs were originally intended to be an additional component to making the especially powerful flasks more challenging to make.

Labs can be found in:

The laboratory in Undercity (with Doctor Herbert Halsey) does not qualify as an alchemical laboratory.