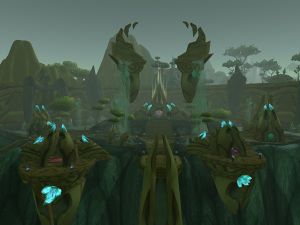 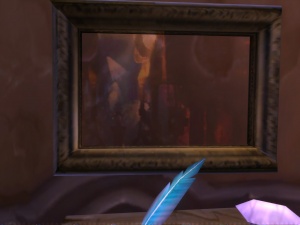 The "Magic Mirror" of Deeprun

Aldor Rise has an innkeeper and a variety of vendors, including vendors who distribute Tier 4 and Tier 5 gear. Unlike the Scryer's Tier, there is no reagent vendor. On the opposite side of the Rise from the inn, there is a staff vendor where players may repair their gear along with a "magical" mirror that shows an inverted photograph of the Deeprun Tram. The Aldor Rise also has a shortcut leading to the High Path in Nagrand, which the Scryer's Tier does not have. Scryer-favored players who wish to take the shortcut to Nagrand through the Aldor rise should be warned not to take the elevator between the Scryer's Tier and Aldor Rise, since aggroing the guards and getting Banished from Shattrath City is very easy. Instead, take the main elevator from the Terrace of Light and dodge past the NPCs and the Inn to get to the tunnel.

The elevator taking adventurers upwards to the rise is notorious for having at least a dozen skeletons, at any given time, of those who miscalculated getting on the elevator and fell to their unlucky deaths at the base. Use caution with Aldor Rise's elevator and don't play games with it. It's better to wait the extra second or the next time the elevator comes up than to jump straight on and waste gold and time getting yourself back together.

Before the destruction of Shattrath, the Aldor Rise was Shattrath Overlook.