The aldrachi were an ancient race of proud and indomitable warriors, renowned for their might and incredible resilience.[1] They were one of the few to ever stand against the Burning Legion; when Sargeras offered them a place in the Legion, the aldrachi refused, slaying innumerable demons before Sargeras himself killed their greatest champion, Toranaar, and ordered the Legion to bathe their homeworld in fel fire for all time. All that remains of the race are the Aldrachi Warblades, which Kil'jaeden bestowed upon the traitorous demon hunter Caria Felsoul, so that she might wield a portion of the aldrachi's might with which to devastate the races of Azeroth.[1][2] 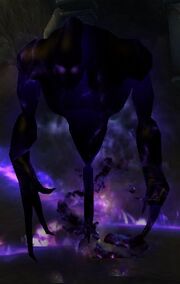 The scattered legends that remain of the aldrachi speak of their unsurpassed skill as warriors. These proud people were bred from birth for combat, and their entire culture revolved around it. Military service was mandatory for all aldrachi, and it began as soon as a child could walk.[2]

More than titles or wealth, the aldrachi coveted weapons as prized possessions and symbols of status, and warblades eclipsed all other types of arms in prestige. These mighty weapons were fashioned from rare crystals found deep below the earth. The strange minerals had many unique properties, the greatest of which was their ability to absorb the spirits of the dead. Blacksmiths employed closely guarded techniques to enchant these crystals and forge them into instruments of death. The resultant warblades could consume the souls of their victims, and each devoured spirit imbued the weapon with greater power. The most ancient warblades contained thousands of souls, and they were revered just as much as — if not more than — the fearsome aldrachi warriors who bore them in battle.[2]

Stories of the aldrachi eventually reached the Burning Legion and its ruler, Sargeras. The Dark Titan was always eager to find mighty new races that he could bend to his will and use as agents of destruction, and the aldrachi seemed like the perfect candidates. Rather than destroying the aldrachi world outright, Sargeras ordered his forces to invade it and wear the warrior race thin until they were ripe for conversion. He knew that the Legion would suffer great losses to the enemy, but that did not discourage him.[2]

War with the Legion

The aldrachi proved more resilient than the Legion had anticipated. The warriors held the overwhelming forces of demons at bay, with even a single one of the aldrachi being able to cut down hundreds of enemies before being killed. Their greatest champion was Toranaar the Indomitable, who was like an army unto himself, his blades howling over the clamor of battle, rending anything that came near. Despite the aldrachi's resilient defense, the Legion slowly and methodically whittled away at their resistance and pushed them back to the towering stronghold in the heart of their war-torn capital. Only Toranaar and a handful of champions remained, each armed with warblades teeming with the souls of thousands of demons. Corpses of aldrachi and demon alike blanketed the earth in all directions, and it is said that not a bare patch of ground could be seen for leagues.[2]

Toranaar and his allies prepared themselves for another Legion assault, but it never came. To the contrary, the demons halted their advance, and then Sargeras himself emerged from the Legion's ranks with an offer for Toranaar. Though no one knows for sure what form Sargeras took to confront the aldrachi, some nathrezim records say that he infused a sliver of his power into an avatar and dispatched it to the aldrachi stronghold. Whatever the truth, it is certain that Sargeras promised Toranaar and his allies untold power if they joined his Burning Legion. They would serve as his personal guards and command tens of thousands of demons in war, an offer Sargeras believed would prove irresistible to the battle-loving race. Toranaar, however, refused. He vowed to destroy the Legion and avenge the deaths of all of the aldrachi killed by the demons or die trying, and said that he would never bow to the Dark Titan.[2]

What followed was a duel between the champion of the aldrachi and the lord of the Burning Legion. The Legion host watched with rapt attention as Sargeras dueled with Toranaar. The Dark Titan could have simply annihilated his foe at any moment, but he did not seek to destroy Toranaar, but to corrupt him. For days, Sargeras battered the aldrachi with just enough force to wear him down. Toranaar recognized Sargeras' ploy and knew that he could not best the Legion's ruler in combat. Thus, he decided on one final act of defiance by feigning submission. When Sargeras let his guard down, Toranaar struck, his warblades ripping through the titan's hide and drawing his molten blood. Though it was only a minor injury, the other aldrachi howled in triumph.[2]

Infuriated by Toranaar's defiance, Sargeras instantly ripped him and his fellow aldrachi champions to pieces, leaving nothing of their bodies but dust. The Legion's ruler then commanded his armies to bathe the aldrachi world in an inferno that would smolder for eternity.[2]

Though the attempt to corrupt the aldrachi had failed, the warblades of Toranaar and his kin remained intact. Sargeras gave the warblades to his lieutenant, Kil'jaeden, and ordered him to distribute them to the Legion's greatest warriors. Those who met Kil'jaeden's standards received a set of warblades, which would come to massacre entire races and consume the souls of a hundred thousand dead. In time, Kil'jaeden had distributed all of the warblades, save Toranaar's, the most powerful arms taken from the aldrachi. The demon lord kept the last set of warblades under close watch for years, until he found someone worthy of wielding them: Caria Felsoul, a demon hunter who had willingly turned against her Illidari allies. In her hands, the instruments of dignity and defiance would become tools of betrayal and murder.[2]

When a demon hunter adventurer tracks down Caria to retrieve the warblades for themselves, she summons Aldrachi Revenants and Aldrachi Soulwraiths to fight them.[3]