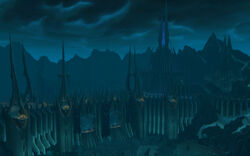 Aldur'thar: The Desolation Gate is the second line of defense used by the Scourge in Icecrown. Behind this gate lies the Valley of Fallen Heroes.

Both the Alliance and Horde have built a small air base on top of Aldur'thar, which they use as a staging point for bombing runs in The Bombardment and the Valley of Fallen Heroes. These camps have remained undetected because they use the newfound infra-green energy, becoming invisible to the naked eye.[1]

At first either Koltira Deathweaver or Thassarian, depending on your faction, send you to investigate the cultist activity. After this, the Death Knights send the player to sabotage this gate by killing Dark Subjugators and killing the Cultist Overseers. The player also has to sabotage the concoctions the cultist make and gather more information by placing a Dark Messenger spy and collecting

[Cult of the Damned Thesis]. This information eventually leads to the death of a very powerful cultist, Alumeth the Ascended.

After these quests the Death Knights consider this gate to be weakened enough for the main armies to take over and the player is sent further into Icecrown, to conquer the Valley of Fallen Heroes and secure the Ironwall Rampart.

Aldur'thar became a major point of operation for the Cult of the Damned after they returned under the control of the Mawsworn.