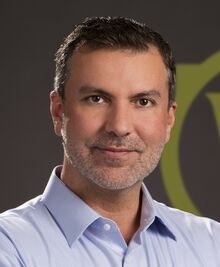 Alex Afrasiabi (alias Furor, or Valnoth on the forums) is the former Senior Creative Director for World of Warcraft at Blizzard Entertainment.[1] He was originally hired to the team as an Associate Quest Designer[2] on March 14, 2004.[3] After 14 years, he left Blizzard in June 2020.[4]

Alex was once leader of a famous Everquest guild named Fires of Heaven (now a World of Warcraft guild). He was hired at Blizzard as a Quest Designer for World of Warcraft and rose through the ranks over the years and became Senior Creative Director. He is notable for having created many signature quests such as the Thunderfury questchain,[5] Bingles' Missing Supplies, Mor'ladim, or the tribute mechanics in Dire Maul. He also oversaw the creation of the Death Knight starting area in Wrath of the Lich King.

After the release of Wrath of the Lich King, Afrasiabi was transferred to the Project Titan team. Titan was ultimately canceled and Afrasiabi rejoined the World of Warcraft team until he left Blizzard in June 2020.