Before the Third War, the wealthy Barov family made a deal with necromancer Kel'Thuzad. In return for a promise of immortality, the Barovs turned their home into a school of necromancy called Scholomance. The Barovs were turned into servants of the Scourge, yet Alexi Barov, one of two Barov sons, broke free of the Scourge and became a Forsaken.[1] Some time after his brother Weldon escaped Caer Darrow, he encountered the undead Alexi but spared his life.[3] As such, they were both heirs to the Barov family fortune.

Although it was unknown how exactly they intended to deal with obtaining that fortune - since most of it was probably still buried somewhere within the treasuries of Caer Darrow - the brothers nonetheless strove for the four deeds that could be found somewhere in Scholomance. This inheritance had made them enemies, and Alexi would stop at nothing to become the only one surviving heir to the Barov fortune.

Alexi was affiliated with the Horde and was located at the Bulwark, in the Forsaken area of Tirisfal Glades. He tasked Horde adventurers with collecting the family deed as well as with slaying his brother in Western Plaguelands. Alliance adventurers sent by Weldon also attacked him and attempted to seize his head.

Since the Cataclysm, however, Alexi seemed to have given up his former goal, as he could be found inside Scholomance, right next to Weldon himself. They attempted to rid their former home of the Scourge. Alexi instructed adventurers within Scholomance to kill Vectus, Marduk Blackpool and Ras Frostwhisper.

Following the events in Invasion Pandaria, Alexi and his brother disappeared without a trace.

Alexi came to Draenor with his brother, Weldon, as partners in Barov Industries. They had united to plunder the world's riches, but their greed got the better of them and they betrayed each other.

He is involved in the garrison quest

[90] The Rise and Fall of Barov Industries: Alexi Barov where he is found under a tree and rescued. He can be obtained as a garrison follower for Horde players. He asks the adventurers to kill Weldon while Weldon asks the same from the Alliance commander.

He can also be seen overlooking fights between garrison commanders in the Coliseum of Highmaul. 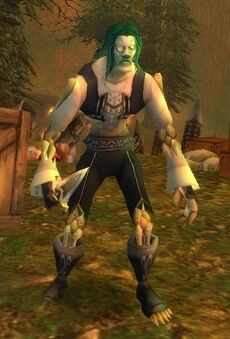 Alexi Barov at the Bulwark.