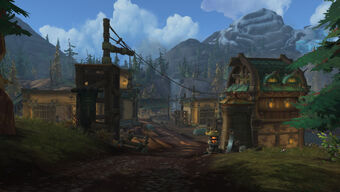 Algerson Lumber Yard is a Kul Tiran lumberyard located in northeastern Tiragarde Sound, near the capital of Boralus. The site is owned by Maynard Algerson, and is regarded as the largest of its kind on Kul Tiras. It has traditionally supplied timber for the construction of vessels for the Kul Tiran fleet, notably those of Dorian Atwater.[1]

At the time of the Fourth War, the lumber yard was overrun by wicker constructs sent by the Witch of the Woods, while also attracting the attention of Kul Tiras's Thornspeakers.[2] Throughout these woes, Maynard Algerson himself has remained bizarrely ignorant of the problems threatening the site, by his own choice.

Products of the Algerson Lumber Yard are marketed in nearby Boralus, through Algersons & Sons Lumber Co.

As the Kul Tiran civil war began to erupt across the continent, the Algerson Lumber Yard came under attack from a very different direction. Wicker constructs, formed from the trees themselves, descended upon the site and began assaulting the lumberjacks. This was coupled with the threat of giant spiders and bears encroaching from the nearby Fernwood Ridge. As a result, work in the lumber yard ground to a halt, though Maynard Algerson himself refused to believe reports of the situation. Instead, Algerson remained within his office, disparaging his employees for their apparent laziness. 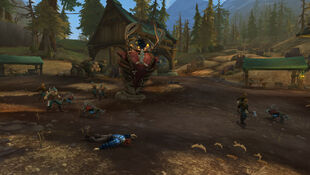 It was only with the aid of a champion of the Alliance, recruited by Maynard's son Benjamin, that the issues began to be tackled. Only after the thinning of the wicker beasts' numbers and protecting of the yard's workers was Maynard finally convinced of the threat,[3] though Benjamin would be the one to investigate further by venturing into Fernwood Ridge alone.

At the same time, a member of the Thornspeakers known as Lyssa Treewarden made her presence in the nearby woods known, also recruiting the Alliance hero to aid her in restoring the nearby woods. Though she was not responsible for the attacks on the lumber yard, Lyssa became determined to work against the rampant destruction causes by Algerson's operations.[4]

Freeing workers trapped in Fernwood Ridge and killing many of the enthralled beasts there finally revealed the source of the chaos gripping the area: a mysterious witch, referred to as the "Witch of the Woods". Having been told this information by Benjamin, Maynard himself ventured out to confront the threat alongside the Alliance hero. At Evergreen Grove, they confronted the spellcaster, who revealed herself to be Maynard's wife, Petula. She sought to end her husband's exploitation of his workers and, refusing to surrender, was cut down.[5] With Petula's death, the immediate threat to the lumber yard was dealt with, though the haunting of the nearby woods would continue.

Later, the Algerson Lumber Yard would be chosen once again by Dorian Atwater as a source of lumber for her ships, when she was commissioned to construct a new flagship for the High King of the Alliance, Anduin Wrynn.[1] Atwater would journey there along with an Alliance champion and several workers to gather a suitable shipment of timber, battling the lingering wicker beasts as they did so. They would soon discover, however, that the Algerson timber itself was still haunted, and would require purifying before it could be put to use.