Allari the Souleater is a blood elven demon hunter of the Illidari who wields the Scythe of Souls. She is first found on Mardum, the Shattered Abyss and later at the Vault of the Wardens. All classes eventually encounter her at the Illidari Stand in Azsuna.

She is also found on the Fel Hammer. 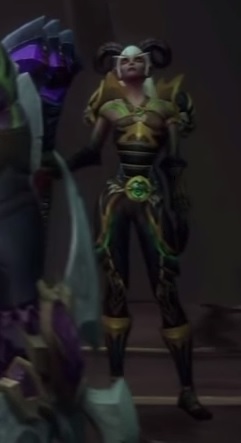 Before embracing the fel and becoming a demon hunter. Allari practiced the arcane and presumably came to Outland with all the other blood elves who joined Kael'thas Sunstrider on his quest. However, her fel magic prevents her from doing much of it and can only sometimes glimpse into faraway places. She would eventually recover an artifact known as the Scythe of Souls.

[Sargerite Keystone] from Mardum. She is first encountered with Questioner Arev'naal, interrogating him. He tells her of the new demons known as Jailers and of captured demon hunters. After gaining enough information, she grabs Questioner Arev'naal and imprisoned him in her scythe. From one of the demons she investigated, she learns of a tome being held by an imp mother. After stealing the tome, she reads from it and learns the ways of Havoc.

After recovering the Sargerite Keystone, she travels back to the Black Temple where she find Illidan defeated. She is then imprisoned by the wardens along with her comrades. They where transported to the Vault of the Wardens.

Years later, she is freed from her crystallised prison and makes her way to the exit. Along the way, she helped re-imprison and take out some of the prisoners.

After the blood elf demon hunters arrive in Orgrimmar to overhear the aftermath of the Broken Shore and witness the death of Vol'jin, she arrived to his funeral ceremony in the Dranosh'ar Blockade in Durotar as the leader of the Illidari delegation. She helped to repulse the attack from the Burning Legion infiltrators.

Allari was later sent to retrieve the Aldrachi Warblades on the Broken Shore. Unfortunately she was overpowered by Caria Felsoul and was left to die hanging on a column. She was rescued by a demon hunter and after a quick pause, both of them moved forward. They took out the demons Gorgonnash and Doomherald Ak'vesh. When the blades were recovered, Allari provided escort on felbats and left the island before the demonic reinforcements arrived.

If Kayn Sunfury is the second in command of the demon hunters, Allari will use her powers to rip the Shade of Akama out from Akama.

Allari is later seen in Azsuna, she is interrogating demons at the Illidari Stand. She had been capturing demon souls to try and gain information about the Burning Legion, but to no avail. The reason for this is thanks to the efforts of Questioner Arev'naal, who had been helping the demons resist. She decides to fight him inside her soul gem to get the whereabouts of Illidan's body. Unfortunately, the demon was slain before revealing it. The only thing he mentions it that the illidari are betrayed from within.

Professor Pallin wishes to create glyphs for demon hunters, but doesn't know much about them. He sends one of his students to meet with Allari to explain what it means to be a demon hunter. After proving their worth by observing and helping them kill the invading demons, she sends the scribe to Baric Stormrunner and Zaria Shadowheart to understand their class fully.

On the Fel Hammer, Allari helps restore the ship by capturing some souls to power it and helped locate the traitors Caria Felsoul and Varedis Felsoul on Niskara. She also had a discussion with Loramus about making warglaives with

[Obliterum]. She eventually becomes a champion of the Illidari.

[Soul Prism of the Illidari].

The subject of this section was removed from World of Warcraft in patch 7.2.0.

In all seriousness, I am deeply honored that you have chosen me, <name>. Something tells me that the worst is yet to come. We must remain vigilant and bring the Burning Legion to an end.[1]

I am using the Scythe of Souls to interrogate these demons, but they do not know anything about the location of the Sargerite Keystone.

They just keep repeating their loyalty to some queen.

Cyana and Jace have moved ahead. Unfortunately, I think Cyana got herself captured trying to help some of our other demon hunters.

There is something not quite right with her...

Our primary goal here is to get the Sargerite Keystone.

We need to finish up down here and get up onto Tyranna's floating command center.

There are many who opposed him, but Illidan was right all along. We are the weapons that will bring down the Burning Legion.

Your eyes are deceiving you. Do not trust them!