Allerian Stronghold is an Alliance hold in Terokkar Forest. It is named after Alleria Windrunner, although she does not currently reside here. The base has a large number of high elves and features some of the only high elven buildings in-game. An elven mage tower, a town hall and a blacksmith are in the stronghold.

During the Alliance's expedition into Draenor, Danath Trollbane lead the company that hunted the shaman Ner'zhul. Once in Terokkar Forest, they were eventually exhausted and tired by the constant travel, and they set up a camp for a night of rest. Talthressar and Herrick both agreed to honor the sacrifices of the Wildhammer clan and designate the location of what would later be the Allerian Stronghold, becoming its founders by doing so. Talthressar said that it would stand as a symbol of the alliance between elves, men and dwarves.[1] 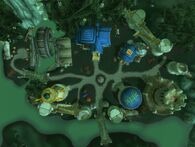 Allerian Stronghold, view from above.