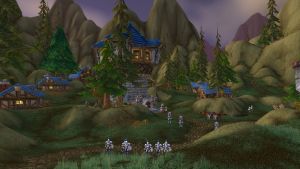 The Alliance Base seen from its entrance. 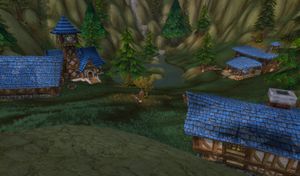 The Alliance Base is located in the Hyjal Summit area during the Battle for Mount Hyjal. It is the first location teleported to from the lobby. Here, Rage Winterchill and Anetheron are fought alongside Jaina Proudmoore. The waves of Scourge forces that attack this place spawn at the Scourge base's entrance.

The base is made up of buildings and units rather similar to how they were in Warcraft III. Its thick walls feature some home-made guard towers with mounted ballistae and there are also a mage tower, farms, a blacksmith and a scout tower. Some buildings that couldn't be built in the original RTS are also present, such as stables, a barn and the mage tower itself. Some buildings are locked, others are not. The base is populated with knights, footmen, riflemen, priests, sorceresses and peasants. Several ballistae can be seen even though they were not used during by the Alliance during Warcraft III. As more nods to the RTS, Jaina has a Brilliance Aura activated and all of the troops are colored in blue besides the sorceresses which are wearing red, a possible nod to their Warcraft III: The Frozen Throne appearance.

An expansion can be found in a valley besides the Alliance Base. It is made up of another barn, a town hall, a lumber mill and an inn.