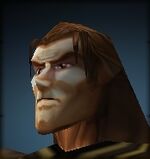 Alliance Emissary was a special emissary sent by King Terenas Menethil II to have his son Prince Arthas Menethil come back to Lordaeron with his forces and to have them give up the hunt for the dreadlord Mal'Ganis, after Lord Uther persuaded the king to do this.

Upon arriving in the Alliance base, Alliance Emissary was greeted by Captain Luc Valonforth who informed him that the prince was away on a mission and would return shortly. Alliance Emissary gave Luc the order to recall the forces back to Lordaeron. The captain then ordered his forces to begin to cut the trees to get to the ships.

Due to the captain responding to Alliance Emissary's orders without the prince's opinion on it, when Arthas returned, he was infuriated that Uther would do this to him; Arthas, Muradin, and two mortar teams headed out to burn the ships so his men couldn't leave, along the way they hired various mercenaries to aid them.

Afterwards, Arthas blamed the Mercenaries for burning the ships, and had them slain. 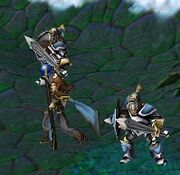 Alliance Emissary can be seen in World of Warcraft: Wrath of the Lich King.

He makes a short return in the quest

[72] The Truth Shall Set Us Free, where he re-enacts the scene where he gives the orders for the troops to return to Lordaeron.

He is not the same emissary that Lord Garithos sent to Prince Kael'thas Sunstrider.