From Wowpedia
(Redirected from Alliance Expedition)
Jump to: navigation, search

"In remembrance of the Supreme Allied Commander, Anduin Lothar: A man who would sacrifice everything in the defense of his king, his people, his home...
Let our enemies know our names. Let our allies honor our passing. We are the Sons of Lothar."
- General Turalyon[2]

The Sons of Lothar,[2] also known as the Alliance Expedition[3] and the Alliance Expeditionary Force,[4][5] are mostly the veterans of the Second War[6] that ventured to the orc homeworld of Draenor during the invasion of Draenor,[7] with the goal of confiscating the stolen magical artifacts (such as the Book of Medivh, Eye of Dalaran, etc.) from Ner'zhul and his Horde of Draenor, stop Ner'zhul from opening portals to other worlds, and to end the threat of the new Horde.

They named themselves Sons of Lothar in honor of Anduin Lothar, who was considered to be the bravest and most selfless human warrior they ever knew.[2] Following his example, they stayed in Draenor, or Outland as it is now called, to safeguard Azeroth from demonic threats.

When the Dark Portal reopened, the Sons of Lothar were reunited with the Grand Alliance and led the Alliance's crusade against the Burning Legion, fel orcs, and Illidan's forces. Three of the Expedition's leaders — Khadgar, Danath Trollbane, and Kurdran Wildhammer — have been confirmed to be alive, but Blizzard has claimed that all five of the individuals memorialized in Stormwind have survived the destruction of Draenor.

Though they affiliate themselves with the Alliance,[8] Khadgar is currently available as a quest giver to both factions. 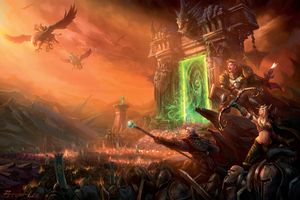 The Sons of Lothar in the Hellfire Peninsula.

As the fires of the Second War died down, the Alliance took aggressive steps to contain the orcish threat. A number of large internment camps, meant to house the captive orcs, were constructed in southern Lordaeron. Guarded by both the paladins and the veteran soldiers of the Alliance, the camps proved to be a great success. Though the captive orcs were tense and anxious to do battle once more, the various camp wardens, based at the old prison-fortress of Durnholde, kept the peace and maintained a strong semblance of order.

However, on the hellish world of Draenor, a new orcish army prepared to strike at the unsuspecting Alliance. Ner'zhul, the former mentor of Gul'dan, rallied the remaining orc clans under his dark banner. Aided by the Shadowmoon clan, the old shaman planned to open a number of portals on Draenor that would lead the Horde to new, unspoiled worlds. To power his new portals, he needed a number of enchanted artifacts from Azeroth. To procure them, Ner'zhul reopened the Dark Portal and sent his ravenous servants charging through it.

The new Horde, led by veteran chieftains such as Grom Hellscream and Kilrogg Deadeye (of the Bleeding Hollow clan), surprised the Alliance defense forces and rampaged through the countryside. Under Ner'zhul's surgical command, the orcs quickly rounded up the artifacts that they needed and fled back to the safety of Draenor.

King Terenas of Lordaeron, convinced that the orcs were preparing a new invasion of Azeroth, assembled his most trusted lieutenants. He ordered General Turalyon and the archmage, Khadgar, to lead an expedition through the Dark Portal to put an end to the orcish threat once and for all. Turalyon and Khadgar's forces marched into Draenor and repeatedly clashed with Ner'zhul's clans upon the ravaged Hellfire Peninsula. Even with the aid of the high elf Alleria Windrunner, the dwarf Kurdran Wildhammer, and the veteran soldier Danath Trollbane, Khadgar was unable to prevent Ner'zhul from opening his portals to other worlds.

Ner'zhul finally opened his portals to other worlds, but he did not foresee the terrible price he would pay. The portals' tremendous energies began to tear the very fabric of Draenor apart. As Turalyon's forces fought desperately to return home to Azeroth, the world of Draenor began to buckle in upon itself. Grom Hellscream and Kilrogg Deadeye, realizing that Ner'zhul's mad plans would doom their entire race, rallied the remaining orcs and escaped back to the relative safety of Azeroth.

On Draenor, Turalyon and Khadgar agreed to make the ultimate sacrifice by destroying the Dark Portal from their side. Though it would cost their lives, and the lives of their companions, they knew that it was the only way to ensure Azeroth's survival. Even as Hellscream and Deadeye hacked their way through the human ranks in a desperate bid for freedom, the Dark Portal exploded behind them. For them, and the remaining orcs on Azeroth, there would be no going back.

Ner'zhul and his loyal Shadowmoon clan passed through the largest of the newly created portals, as massive volcanic eruptions began to break Draenor's continents apart. The burning seas rose up and roiled the shattered landscape as the tortured world was finally consumed in a massive, apocalyptic explosion.[9]

In the two decades since the Battle of Hellfire Peninsula, much has changed in the world of Azeroth: The Kingdom of Lordaeron has fallen, the mythic lands of Kalimdor has been rediscovered, and a great victory against the Burning Legion has been achieved at the Battle of Mount Hyjal. The Horde and the Alliance have an uneasy peace, but conflicts have arisen over resources in both Kalimdor and in the Eastern Kingdoms. But the question remained in the minds of the Alliance, ever since the Dark Portal was sealed: What happened to the brave souls who led the expedition to the world of the orcs?

Many believed that they were killed by the cataclysm that destroyed Draenor; others believe they escaped to other worlds within the Twisting Nether through the powerful rifts opened by the shaman Ner'zhul; and some others believe that they survived in the remnants of the world. After the reconstruction of Stormwind, five statues in the likeness of Turalyon, Alleria Windrunner, Khadgar, Kurdran Wildhammer, and Danath Trollbane were placed within its Valley of Heroes to inspire future heroes of the Alliance. To honor the leaders for making the ultimate sacrifice for the safety of Azeroth, these heroes of the Alliance Expedition were memorialized in stone to commemorate their heroic deeds.

Years later, the Dark Portal was reopened by the demon Lord Kazzak. In his wake, legions of demons came spilling through into Azeroth. The forces of Nethergarde Keep were quickly rallied, and with aid from the Argent Dawn and numerous adventurers the demons were pushed back through the Portal, securing it once more. The adventurers, not satisfied in securing only one side of the Portal, pressed through to Outland after Kazzak where they discovered what became of Draenor.

Vestiges of the Sons of Lothar, veterans of the Alliance that first came into Draenor, have steadfastly held on to their Hellfire outpost of Honor Hold and other Alliance strongholds. According to Khadgar, after the Sons of Lothar were trapped in this broken wasteland now known as Outland, they did their best to survive. Over time they sensed that a new evil was closing in around them from the Twisting Nether and believed the demons once again sought to claim Outland. They are now joined by the armies from Stormwind and Ironforge and together, they continue to fight demonic and native aggression, while also striving to put an end to the Burning Legion's Burning Crusade. Force Commander Danath Trollbane leads the Sons of Lothar's campaign in Honor Hold, while Kurdran Wildhammer patrols the skies of Wildhammer Stronghold in Shadowmoon Valley. Allerian Stronghold, on the edge of Auchindoun in Terokkar Forest, is named after Alleria and is were most high elves reside, and Kirin'Var Village, in Farahlon, is where the mages of the expedition settled. Sometime before the Dark Portal's reopening, Khadgar had used his magic to reach into the Great Dark Beyond and found the naaru led by A'dal. He convinced them to come to Outland to aid in stopping the Legion's incursion on the shattered planet.[10] Khadgar can be found in Shattrath City, acting as an envoy to the Sha'tar[citation needed]  to coordinate with the faction and aid them in providing some stability and protection for Outland. Only Alleria and Turalyon have yet to be found as they were presumed lost during some horrific battle with the Burning Legion. Their son, Arator the Redeemer, believes them to be still alive and continues his search for them. He traveled to Honor Hold with the Alliance armies and offered Commander Trollbane his services.

Although many died during the Sons of Lothar's military campaigns, some continued to haunt their fallen holdings as restless spirits. The Alliance soldiers stationed at the Expedition Armory fell to the Horde of Draenor and became the spectral Unyielding. The mages of Kirin'Var Village too were decimated; since the Kirin'Var mages died from a mana bomb detonated by Kael'thas's Sunfury forces.[11] Following the blood elven assault, the necromancer lich, Naberius, had enslaved the fallen Kirin Tor as enthralled spirits.[12]

The floating remains of Draenor, now known as Outland, has become a warzone. The Alliance and the Horde have occasionally skirmished for political reasons, but the Illidari, savage Outland natives, and agents of the Burning Legion have all threatened the Sons of Lothar with their machinations to dominate Outland. The Sons of Lothar employed adventurers of the Alliance to secure Outland from these threats and tame the shattered planet's savage lands.

After the Cataclysm, Kurdran Wildhammer has returned to Azeroth — leading the Alliance forces in the Twilight Highlands.

Later Khadgar has returned to Azeroth, staying in Dalaran until the Dark Portal turned red.

Continuing from his role in the War in Draenor, Khadgar leads the united class orders against the latest invasion of the Burning Legion. Danath also travels to Dalaran to aid in the fight.

[Light's Heart], and later from a Light-infused nathrezim named Lothraxion, that Turalyon and Alleria are still alive, having become leaders in the Army of the Light. Khadgar reunites with the two of them on Argus, homeworld of the Legion, and tells them that Danath and Kurdran are both still alive. The three resolve that the Sons of Lothar will hold a reunion feast when the fighting is over.[13]

Though Turalyon was the Supreme Commander of the Alliance following the death of Anduin Lothar, the Alliance Expedition itself was led by Khadgar, who had called for the army to be rallied at Nethergarde and led into the Dark Portal to Draenor. As Khadgar's task was by far the most important - to retrieve the Book of Medivh and seal the Dark Portal to save Azeroth from destruction - Turalyon and his lieutenants deferred to him when it came to ways to achieve that task. Otherwise, the command of the Expedition's forces fell under Turalyon's purview.

The Alliance Expedition is also known as the Draenor Expedition.[14]