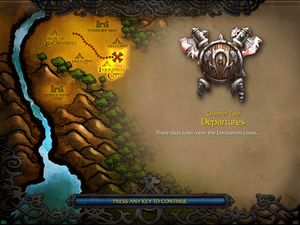 Map of the base.

The Alliance Naval Base was an Alliance port southwest of Durnholde Keep, east of a river bisecting the area in Arathi Highlands. It was where the humans had captured Grommash Hellscream and his clan. It was manned by a group called Alliance Forces. The base was raided by the Horde led by Thrall who freed Grom and stole ships.[1]