Alodi was a half-elven mage and the first Guardian of Tirisfal. He was said to be an orphan.

[Ebonchill], is the Artifact for frost mages in Legion.

Alodi never knew his real parents. From infancy, he was raised in an orphanage for magically gifted children in Dalaran. His only connection to his parents was

[Ebonchill], which they had left with the boy when they abandoned him at the school. His dubious parentage and mixed ancestry made life difficult for Alodi. Most magi pitied him, but others treated him with scorn. No one believed he would rise to greatness. From his early days in the Dalaran orphanage, Alodi had been fascinated with frost magic. This was due in part to the icy enchantments woven into Ebonchill. With the staff, Alodi learned how to freeze water and manipulate air temperature, often to the chagrin of the orphanage headmaster.[2]

Alodi was engaged to the human Eidre, whose family owned land on Brightwater Lake, but she broke it off due to his duties as Guardian. She later made peace with the fact that she could not keep him to herself and from helping the world as she witnessed how Alodi fought and banished the dreadlord Kathra'natir,[3] the first demon banished by a Guardian.[4] 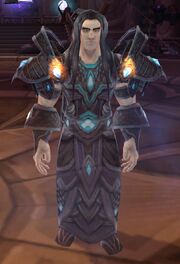 The spell Alodi and Meryl created would later be applied to a device known as the Forge of the Guardian and used for all Guardians from that day on, until the day Aegwynn refused to return her power.[1]

He later had a relationship with the head of the Bank of Dalaran, a shapeshifting "astral entity" named Glutonia, who was an elf in his time but a goblin today.[5]

Shortly after Alodi became Guardian, he honed his mastery of frost magic and imbued Ebonchill with his own powers. A wintry aura enveloped the staff. Much to the astonishment of Alodi's companions on the Council of Tirisfal, the weapon never felt cold to the touch. Ebonchill contained only a sliver of Alodi's might, but even that was more than most magi could ever hope of wielding. During Alodi's tenure as Guardian, he used Ebonchill to hunt down every demon that stalked the lands of Azeroth. Many records tell of him calling down vicious ice storms to overwhelm his enemies, or encasing the Legion's agents in solid blocks of ice before exiling them from the world.

Near the end of Alodi's one hundred years of service as Guardian, he turned his attention to his apprentices. He had trained and tutored many young magi in the ways of the arcane. They had become the family that he had never had, and he treated them all as his own sons and daughters. Alodi decided to pass on Ebonchill to one of these learned apprentices. He did not choose the most powerful. More important to Alodi were compassion, wisdom, and comradery. After much consideration, he entrusted his greatstaff to the apprentice who most embodied these traits. So began a tradition of bequeathing Ebonchill that would endure for millennia.[2]

When Alodi died, his spirit was forever bound to the Forge of the Guardian, available for consultation to the Kirin Tor if he was ever needed.[6]

Khadgar and the Council of Six of Dalaran called on the spirit of Alodi to ask of him the location of the Pillars of Creation, as while he had written

[Notable Antiquities of Ancient Azeroth] on the subject that Khadgar found within Karazhan, it did not elaborate on their location because even he dared not trifle with their power. Alodi directed the mages to the Broken Isles.[6]

When Meryl and a mage adventurer battle Kathra'natir in the Violet Hold, Alodi's spirit is awakened within the Forge of the Guardian and temporarily infuses the adventurer with his power to aid in the fight.[7] Afterwards his spirit travels to the Hall of the Guardian with Meryl and the hero to recreate the Tirisgarde, a group of magi used by the Council of Tirisfal in the absence of a Guardian. If asked, he will help to retrieve Ebonchill.