Alpin was a Wildhammer dwarf during the Second War. He was one of the Wildhammers who were knocked off their gryphons during the second raid on the orcs by the forest trolls. His fate was reported by Beathan to Kurdran.[1] 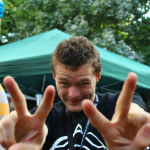