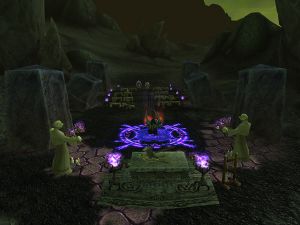 The Altar of Damnation.

The Altar of Damnation is a site located near the Fel Pits of Shadowmoon Valley, on the southwestern side of the Hand of Gul'dan landmark. Here, a vision repeatedly appears depicting Gul'dan committing the acts that would sever the orcish connection to the elemental spirits of Draenor. Gul'dan shattered the land and forcefully took the raw energy which the elements would not give willingly to use in the war against the draenei.

After he completes the ritual, aspects of Gul'dan's personality manifest. The remnants of his malice, hate, greed, pride, and corruption all appear in a pentagonal formation around the original copy of Gul'dan, which sits in the middle in a circle of magic. They are involved with