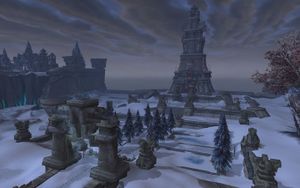 The Altar of Quetz'lun is a temple within Zul'Drak, dedicated to Quetz'lun, the wind serpent goddess.

Right before her physical body was destroyed, Quetz'lun created her own private underworld nightmare in which she dragged all her former worshippers and high priests into. Quetz'lun was unable to pull her prophet in however.

Currently the area is guarded by elite wind serpents and air reverents.

Beginning with the quest

[77] Seek the Wind Serpent Goddess, upon entering this region, the character will gain the Ghostly buff, "leaving their mortal form behind" and going into Quetz'lun's private underworld.

This uses the same graphics transformation as being dead, and works much like the

[Bash'ir Phasing Device] in that while you have the buff on, you are in the phased environment.

After completing the quest

[77] One Last Thing, the area phases back to normal.

The Altar of Quetz'lun subregion (which includes the altar itself and the courtyard in front of it) is a troll archaeology dig site. It should be noted that the elite guards are initially hostile, and become neutral through completing quests relevant to the area. The guards being neutral greatly simplifies surveying in the area.