From Wowpedia
(Redirected from Altar of kings)
Jump to: navigation, search 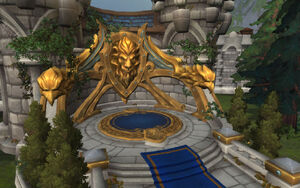 The Altar of Kings in Stromgarde Keep.

Altar of kings were mystical buildings built by the Alliance of Lordaeron and the high elves.

Made from materials provided by the Kirin Tor, the Altar of Kings acts as a harness for the derelict life forces of fallen human champions. It is only at this site, once erected, that heroes may be resurrected to do battle once again. The specifics of this building's magical properties are among the most guarded secrets in all the human realms.

The high elves kept one third of the Key of the Three Moons to Silvermoon City in these altars with four obelisks surrounding each of them.

At least one altar of kings was meant to appear in the early days of World of Warcraft, but the means of resurrecting players were changed during the alpha and most related altars were thus scrapped.

The Altar of Ancient Kings in the Sanctum of Light is the forge for the paladin artifacts.

An Altar of Kings is used to summon heroes to Stromgarde Keep during the Battle for Stromgarde.