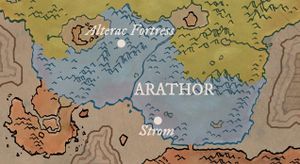 Alterac Fortress in Arathor during the Troll Wars.

Alterac Fortress was the name of a fortification constructed at the order of King Thoradin during the several months after Arathor agreed to join the high elves of Quel'Thalas in war against the Amani Empire around 2,800 BDP.

The fortification was built within the foothills or lower slopes of the Alterac Mountains. While Thoradin's generals also had forts built throughout the fertile Eastweald, located to Tirisfal's east, the location of Alterac Fortress ensured it would remain Arathor's most important northern fort.[1]

The fortress was intended to be a staging ground for the army of Arathor while it was assembled by King Thoradin and his generals: Lordain and Ignaeus. Once the first human magi were trained, King Thoradin had all one hundred remain at Alterac Fortress while he led his army of twenty thousand against the Amani warlord Jintha's troll host in southern Quel'Thalas. However, Thoradin's maneuver was a ploy because he began retreating back to Alterac Fortress with the troll army hot on his heels. Upon arriving at Alterac Fortress, the Arathi and high elven armies smashed against the troll forces from two sides in front of the fortress. Eventually, once the Amani were worn down, Thoradin unleashed the magi, still hidden in Alterac Fortress, who in tandem with elven sorcerers, unleashed a massive firestorm upon the Amani army, incinerating thousands of warriors, loa, and even the warlord Jintha. The Battle of the Alterac Mountains decimated the forest trolls. Leaderless, the Amani Empire retreated, ending the Troll Wars.[2]

Following the war, Alterac Fortress and the other Eastweald forts would become large population centers as the Arathi, feeling safe to leave the security of Strom, ventured out to settle the continent.[3]

Given the central location of the Alterac Fortress in a map in World of Warcraft: Chronicle Volume 1,[4] it is likely that Alterac City developed around the fortress in the coming centuries.