For the original zone before the Cataclysm, see Alterac Mountains (Classic).

The Alterac Mountains is a massive mountain range bordering the Hillsbrad Foothills and is also the location of the former nation of Alterac. Its chief settlements included Alterac City and Strahnbrad. It contains many areas and several ruins filled with Crushridge ogres and members of the Syndicate.

In the past years little action has been seen in the mountains apart from the skirmishes in Alterac Valley.

The slopes of the Alterac Mountains were once home to the human Alteraci tribe, who became part of the Empire of Arathor after their leader Ignaeus was bested in a duel by King Thoradin.[1][2] During the Troll Wars, generals of Arathor established the stronghold of Alterac Fortress at the base of the mountains, and the final and most decisive battle between the Amani Empire and the combined human and high elven armies took place at the foot of the mountains.[3][4] As Arathor began fracturing in the centuries after the Troll Wars, the city-state of Alterac was established among the peaks and came to hold dominion over much of the northlands.[5][6]

During the early days of the Second War, the high elves of Quel'Thalas sent a contingent of archers south to survey the supposed orcish threat for themselves. Shortly after passing through the Alterac Mountains the elves were ambushed by Horde troops and brought to a prison camp near Tarren Mill.[7]

Some time later, the treachery of the humans of Alterac was revealed by the Alliance of Lordaeron, and an army was sent to the Alterac Mountains to strike the traitors at their heart. An Alteraci prison camp was also situated near Alterac City, containing captured Dalaranian citizens.[8]

After the end of the war, military outposts maintained by Lordaeron and Stromgarde were built along the borders of the Mountains. These outposts were raided by the Horde of Draenor in order to get the Book of Medivh back from the Alteraci.[9]

At some point, the mountains were invaded by gnolls. The dwarven mountain king Murgen Hammerfall used his abilities to decimate the gnolls. Kobolds also infested the deep tunnels of the mountains.[10]

The Alterac Mountains were home to a large portion of the demon-worshiping orcish Blackrock Clan and its allies. Though they regrouped after the Alliance's retribution for their attack on Strahnbrad, they were thoroughly defeated by the Scourge on its march to Dalaran. Other inhabitants included gnolls, the human Bloodhill Bandits, murlocs,[11] and ice trolls.[12]

The Scourge led by Arthas later wiped out the Blackrock clan villages when Kel'Thuzad communicated with Archimonde through their Demon Gate. Here, the orcs still controlled red dragons and were allied with ogres, forest trolls, and goblins.[13]

Kel'Thuzad opened a portal for the Burning Legion near Dalaran. After Archimonde was summoned he summoned a spell that destroyed Dalaran.

After the Third War, the area near Dalaran was a battlefield between the night elves, blood elves, Scourge and Illidan's naga. Illidan later used Kel'Thuzad's rift to open a portal to Outland.

Barony Mordis is located somewhere in the mountains. It was overrun by the Scourge during the Third War. It was ruled by the Forsaken Valimar Mordis.[14]

In the years that followed, the ruins of the city of Alterac were claimed by the ogres of the Crushridge clan, led by warlord Mug'thol. What little Alliance activity was left in the region was centered around the entrances to Alterac Valley, where the Stormpike Guard and the orcish Frostwolf clan vie for supremacy. The Syndicate also have control in the area.

The area remained mostly unchanged with the Cataclysm. Its fingers, originally controlled by the Syndicate, turned into Alliance camps, were sabotaged by the Forsaken.[15]

The Alterac Mountains are high peaks rising up north of the Hillsbrad Foothills, and spreading to the border of the Western Plaguelands in the north and The Hinterlands in the east. Covered with snow at their highest point, these mountains were once the location of some major human settlements. Now these settlements lie in ruins and are controlled by hostile forces. The mountains themselves are home to several kinds of high-altitude flora and fauna, such as yeti and mountain lions. The rare herb

The mountains is surrounded by green lands having the Lordamere Lake and the Dalaran Crater to the west, Chillwind Point to the east and the Forsaken settlements of Tarren Mill and Sludge Fields to the south.

The farmlands of the kingdom of Alterac were located in the Uplands. 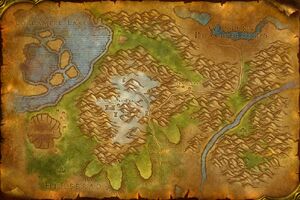 Map of the Alterac Mountains prior to Cataclysm, before being merged with the Hillsbrad Foothills.

The Alterac Mountains have traditionally been a home for the humans of Dalaran and Alterac, members of the Alliance of Lordaeron. The settlements were all bases of peaceful activity, and were in the beginning at peace with each other.[citation needed]

Once inhabited by noble humans, Alterac is a shattered realm struggling to survive the wars' carnage. An organization called the Syndicate is strong in this region. They are a group of thieves who were once Alterac nobles and now seek to reclaim their lands — and any other lands they can lay their hands on — by any means necessary. They battle for control with the huge Crushridge clan of ogres that has taken over Alterac City.[16]

Hostile factions control the few settlements that remain in the mountains.[17]

During the Second War, the Horde attempted to conscript some Alliance nobles to help them in their campaign, and the weak-willed nobles of Alterac readily agreed to help the orcs overthrow the Alliance leaders and take Lordaeron. With the defeat of the Horde came the punishment for these traitors: exile from their former holdings. These exiles would eventually form the Syndicate and take back the Alterac Mountains from the Alliance.[18]

Like all of Lordaeron's regions, Alterac suffered horrendously when the Scourge blazed through the continent. The Perenolde family's current scion, Lord Aiden Perenolde, is a high-ranking Syndicate member who resides in the Uplands. The Syndicate struggles to regain control of this wild land, while ruins dot the mountainsides and Crushridge ogres patrol their territory.

The Syndicate kidnapped a wealthy dwarf merchant's son and they didn't want ransom but help in driving the ogres from Alterac City. Murrik Doubletoe, the captured dwarf's father, hired outside help to advise him and either rescue his son or defeat the ogres.[19]

Two major factions control the Alterac Mountains: the Syndicate and the Crushridge ogres. The Syndicate is a complicated network of bandits who were once Alterac nobles. These men and women operate mainly in the Alterac Mountains and the surrounding area, but fight, murder, lie and steal to reclaim their ancient lands. They are out for themsleves, though it would work with others if doing so helped them meet its ultimate goal. Syndicate agents dress in brown and black when on the prowl, but don their aristocratic finery in their holds.[16]

The Crushridge ogres are cunning, massive and strong. Leftovers from the Second War, these ogres have thrown off orc rule for their own primitive ways. They live in Alterac City and kill whatever they can. The ogres and the Syndicate fight a continuous guerilla war.

The Syndicate's private war and the ogres' mindless slaughter are foolishness. Alterac shares its northern border with the Western Plaguelands, so a Scourge invasion is only a matter of time. Such an attack would spur the Syndicate to battle against the undead, and the ogres would fight to stay alive. Their numbers, however, are too few.[20]

The Stormpike clan have taken a liking to the Alterac Mountains and defend them fiercely against the trolls and orcs invading the area.[21]

The Alterac Mountains are not only high and temperate but also cold and misty. Few fertile valleys lie within the peaks, and those that do are fallow. Rainfall is high and the sky is often overcast with gray clouds, making the region drear. The Crushridge ogres and the Syndicate have driven away most native wildlife, but yetis still inhabit the deeper caves.[20] Alterac resembles Loch Modan, but warmer. Huge pine trees tower over the landscape and occasional green meadows and tenacious shrubs can be found amid the gray, rocky peaks.[16]

To the south are the Hillsbrad Foothills, east is the Hinterlands, west is Lordamere Lake and north are the Plaguelands.[16] A magic field closes off Dalaran, to the southwest. Its wizards patrol the local surroundings, but wisely do not concern themselves with Alterac's affairs.[17]

In the RPG book Lands of Conflict, Durnholde Keep is labelled as part of the Alterac Mountains and Hillsbrad Foothills.[22]

The ice trolls of the Winterax tribe dwell in the mountains and valleys of Alterac, and are hated foes of the Frostwolf clan orcs and both the Stormpike and Wildhammer dwarves.[23]

In the canceled Warcraft Adventures, much of the story takes place here. Along with familiar locations like the home of the Frostwolf clan, Alterac is home to snowy deciduous forests[24] and an insolated gnomish workshop.[25] It is also inhabited by a number of species not found here in World of Warcraft or Warcraft III: