For the lore of the zone and its status after the Cataclysm, see Alterac Mountains.

Alterac Mountains is the location of the former nation of Alterac and the city-state of Dalaran, and its chief settlements included Alterac City, Dalaran and Strahnbrad. The central mountains have been overrun by ogres, while the organization called the Syndicate controls Strahnbrad and other areas. Dalaran was enclosed within an impregnable magic shell before the city was lifted in the air and moved to Northrend. A high, wooded region, the Alterac Mountains see much rainfall and its skies are constantly overcast. Crushridge ogres and the Syndicate, a wicked group of rogues led by fallen human nobles, clash repeatedly for control of this land.[1]

The ruins of the city of Alterac has since been claimed by a tribe of ogres, and the majestic city of Dalaran was annihilated by the demon lord Archimonde during the Third war. The Dalaran mages warred against the Forsaken while they rebuilt their city, only to move the city to Northrend via powerful magic. What little Alliance activity is left in the region is centered around Dalaran Crater and the entrances to Alterac Valley, where the Stormpike Guard and the orcish Frostwolf clan vie for supremacy. 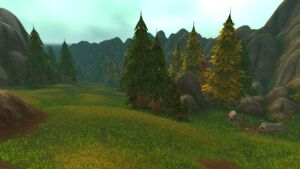 The Alterac Mountains are high peaks rising up north of the Hillsbrad Foothills, and spreading to the border of the Western Plaguelands in the north and the Hinterlands in the east. Covered with snow at their highest point, these mountains were once the location of three major human settlements. Now these settlements lie in ruins and are controlled by hostile forces. What remains of the third settlement, the city of Dalaran, is now a crater. The mountains themselves are home to several kinds of high-altitude flora and fauna, such as yeti, mountain lions and the rare herb

There are no flight paths, dungeons or raid dungeons in the Alterac Mountains. However, the Alterac Valley, a high level PvP battleground, lies within these mountains. In addition, the Ruins of Alterac are home to many ogres. They used to be elites until Patch 2.3.0 and the area was considered a micro dungeon.

The layout of the Alterac Mountains zone may be confusing. It is effectively divided into two subregions. Apart from the mountain pass leading to Chillwind Point in the Western Plaguelands at the north, the "outer" green zone encircling the actual mountains has no clear-cut borders, instead smoothly transiting into Silverpine Forest and Hillsbrad Foothills. It is the outer zone that contains Dalaran, Chillwind Point, the Uplands, and the southern coast of Lordamere Lake.

The "inner" zone, containing the Ruins of Alterac and Strahnbrad, looks very different. It is a snowy highland region surrounded by mountains, sharply transiting into the outer zone outside Stratholme. A traveler entering the inner area by road from Hillsbrad Foothills may mistake it for the entire Alterac Mountains zone, making it seem much smaller than it actually is. 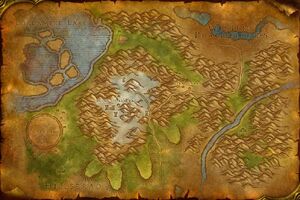 Alterac Valley: Both the Horde and Alliance entrances to Alterac Valley can be found in these mountains, just below the snow line.

The Alterac Mountains are home to several characters of note. At the entrance to Alterac Valley, Lieutenant Haggerdin seeks aid in the battle against the Frost Wolves, and Warmaster Laggrond has similarly declared war on the Stormpikes. At his manor, Lord Jorach Ravenholdt attempts to teach adventuring rogues the true skills of their trade. And at Dalaran, Archmage Ansirem Runeweaver sends bold adventurers to the jungles of Stranglethorn in search of his missing daughter. 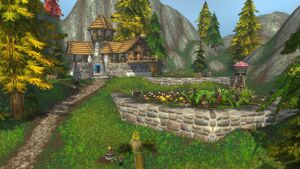 Ore
The snowy areas around the Ruins of Alterac are very abundant with iron and sometimes mithril, especially inside ogre mounds and caves. 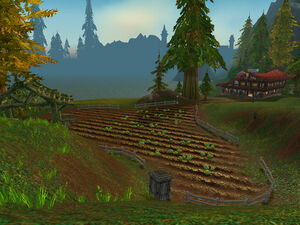 The Alterac Mountains are also home to Narillasanz, a rare elite dragon.