Bunkers are Alliance defensive structures, and Towers are Horde defensive structures. Each side has 4 of these buildings, and 3 house an enemy Wing Commander. 2 of the 4 house a Commander. These towers have ranged attackers posted inside them that shoot enemies outside the structure. Towers and Bunkers can be destroyed if an enemy player captures the flag inside. This will prevent the ranged fighters from attacking and allows an opportunity to save your Wing Commander. Once a flag is capped it must be held for 4 minutes before the Bunker/Tower is destroyed. Once a tower is destroyed, it is gone for the rest of the battle. (Changed from 5 minutes in Patch 2.3) Moreover, when you destroy a tower, a Warmaster/Marshal will spawn in your General's room, and a Warmaster/Marshal will disappear from your enemy General's room. These NPCs are very powerful and will greatly delay the offense of the opposing team.

Graveyards are where dead PCs resurrect upon death. If you die in Alterac Valley you will resurrect at the closest graveyard that your side controls. Capturing graveyards is therefore a critical part in the Alterac Valley assault because it allows PC reinforcements to arrive much more speedily. After capping the Graveyard flag it takes exactly 4 minutes (As of Patch 2.3) for the Graveyard to cede control to your side

There are 2 mines in Alterac Valley: Coldtooth Mine and Irondeep Mine. At the beginning of the battle, each Mine has a complement of humanoid NPCs, and one named NPC. If the named NPC is killed by your faction, the mine will flood with aligned troops and will cede control to your side.

In Patch 1.11 Mines have become significantly easier for individuals to capture, and many classes can easily solo each mine. Most groups in each mine are linked three pulls, with two workers and either a caster or melee overseer. Each individual within these groups has around 1000 to 1200 hitpoints and are easily brought down. Some of the alcoves house larger numbers of NPCs, either four or five, and there is a patrolling route of five NPCs throughout both mines. The named leader inside both mines, regardless of alignment, is no longer elite, and can usually be killed single-handedly, allowing control to switch over. As a result, mines have become largely insignificant in Alterac Valley, due to the change in pacing of each game and how easily gained and lost they become, and can sometimes be ignored throughout an entire game.

Mining supplies inside the mine can be looted and returned to base, provided you have the corresponding quest.

After a mine is taken, your troops will begin to spawn wiping out the mine of neutral NPCs.

After taking a mine, the original enemy mine boss will eventually respawn to try and retake the mine. Be sure to kill this boss when he respawns and you will continually have access to the mine. 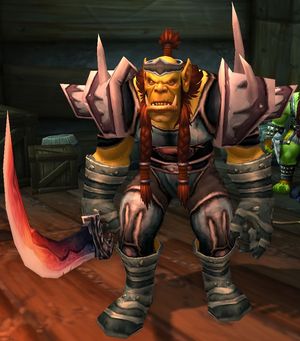 Keetar, Horde Leader of the Irondeep Mine in the Alterac Valley battleground.

Neutral Leader: Morloch, Warlock type, kill his imp first to knock out some of his DPS.

Horde Leader: Keetar, 2H Warrior type, has a nasty whirlwind that can dice up rogues.

Note: The kobolds have an annoying fire damage aura that can knock you out of stealth, take care in sneaking around the mine, fire resist gear can help. Kobolds, unlike Troggs, will run and can bring friends if not killed quickly. Also, despite being very easy to kill, they can cause a high amount of melee damage after repeatedly applying

There are 2 Caves in Alterac Valley which serve no purpose except to house an item used for the quests Proving Grounds (quest).

The Field of Strife is not a building, but rather an open expanse in Alterac Valley where the intial fighting begins. It is located in the middle of Alterac Valley. It contains no key structures, a few scattered NPCs for both faction, and is important for summoning Ivus the Forest Lord and Lokholar the Icelord.

The Field of Strife is also an important site for Alliance (and probably Horde) to launch an aerial offensive, with each Wing Commander, having successfully received enough collected medals or flesh, asking for a beacon to be planted in either the west or east crater. This beacon must be protected for one minute, and if done so successfully, an aerial assault will launch.