Commander Althea Ebonlocke is a level 45 quest giver located in Darkshire in the human-aligned territory of Duskwood. She is the daughter of Darkshire's Mayor, Lord Ello Ebonlocke. She leads the local militia called The Night Watch and have sworn to protect the citizens of Darkshire. She later betrayed them by joining the Veiled Hand, becoming Sister Althea Ebonlocke.

Althea was once approached by Lieren and Loania who wanted to know what happened with their mother, Adena. She told them that Adena was dead.[1]

Shortly before the Cataclysm, Althea was approached by the mage Karlain from Goldshire who was looking for his son Mardigan. She told him that Mardigan was seeking the Wolf Cult. Althea, being reported about the presence of the Dark Riders in Manor Mistmantle, directed Karlain to the priest Revil Kost in order to get there.

Later, being apparently told by Brink, Althea led a small group of night watchers in an ambush against the Dark Riders. A rider teleported the group alongside Karlain and Revil into Karazhan. They continued the battle with the Riders and the Curator, but Brink found an amulet and sent the watchers back in time before the ambush so it won't be planned as the rogue and priest didn't time travel.[2]

It is revealed that she betrayed Stormwind by becoming a leading member of the Veiled Hand. Her betrayal is discovered by the Shadows of the Uncrowned in the town[3] after which she moves to Stormwind City where she is killed by Garona Halforcen and the rogues.[4] 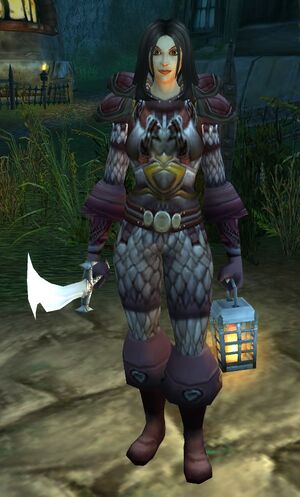 Multiple units often work together under her. She has yet to earn the respect of many of the militia. Well known for her keen and decisive orders in the field, however, she is well on the road to gaining the Night Watch’s trust.[5]

"At ease, <class>. If you are just passing though I suggest you stick to the roads and only travel by day. If your business is here in Darkshire, consider lending your abilities to the Night Watch. Our Skill is unquestionable but our numbers are small."

She may be related to Ebonlocke.

Kanrethad, a member of the Council of the Black Harvest, may be related. He is identified with the last name Ebonlocke during the warlock quest chain in Outland.