Aman'Thul (or Aman'thul),[2] the Highfather, is the leader of the titan Pantheon. He is the oldest and wisest of his kind.[3] The titan who originally blessed Nozdormu and the bronze dragonflight, Aman'Thul has mastery over temporal magic. Having led the Pantheon during the ordering of the universe, he and his brothers were felled by Sargeras, their souls held captive by the Dark Titan until they were freed by the heroes of Azeroth. 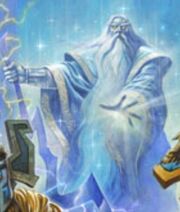 According to legend, Aman'Thul was the first titan to wake from his slumber. He was alone in the Great Dark, but knew in his heart that other titans must exist, and so set out to explore the myriad worlds of the universe in search of others of his kind. Over time, he discovered other nascent world-souls and lovingly nurtured them until they awoke and joined him in his travels. Eventually, Aman'Thul and his siblings became known as the Pantheon, and in the early ages of the universe they ordered and reshaped countless worlds in hopes of finding other titans.[4] In order to aid the Pantheon, Aman'Thul called upon the celestial beings known as the constellar to observe and watch over the many worlds ordered by the titans.[1]

During the ordering of the world of Azeroth, home to a particularly powerful world-soul, the titans crafted the titan-forged in order to battle the monstrous Old Gods that had infested the world. Though the titan-forged were largely victorious against the forces of the Old Gods, the Pantheon grew concerned that Y'Shaarj, the most powerful of the Old Gods, would prove too mighty for their servants to defeat. Despite the titans' colossal size posing the risk of inflicting permanent harm to Azeroth, Aman'Thul himself reached down through the stormy skies and heaved Y'Shaarj from the crust of the world, tearing the Old God apart.[5] Before leaving Azeroth in the care of the titan-forged, Aman'Thul commissioned the constellar Algalon to watch over the planet.[6] After the defeat of Galakrond, Aman'Thul used Ra as a conduit to channel his power into Nozdormu, gifting him with powers over time.[7]

When the Pantheon confronted the traitorous titan champion Sargeras near the world of Nihilam, Aman'Thul pleaded with Sargeras in an attempt to make him abandon his mad Burning Crusade. The Highfather told the fallen titan about the world-soul of Azeroth, and how it would have the potential to stop the void lords without the need to purge the universe of life. Sargeras listened carefully but was unmoved.[8]

Like the rest of the Pantheon, Aman'Thul could not stand against Sargeras' fel power, and was ultimately destroyed. Like the others, however, Aman'Thul's soul was saved by a spell cast by Norgannon, and the now disembodied spirits of the Pantheon hurled out through the cosmos[8] until they reached Azeroth and slammed into the titan-forged keepers assigned to watch over the planet.[9] Aman'Thul's spirit entered the body of Ra, his greatest servant, who was the only keeper to realize that the brief influx of power felt by the titan-forged was not a mere anomaly, but the very last remnant of the Pantheon's power. Carefully, Ra extracted Aman'Thul's soul fragment and stored it in a mountain vault near the Vale of Eternal Blossoms.[10] There it remained until many years later, its power was absorbed by the mogu warlord Lei Shen, who used it to establish the mogu empire.[11]

Sargeras would eventually capture the spirits of the Pantheon, except for Eonar who escaped. Aggramar succumbed to Sargeras's torture and was revived as an avatar[12] on the planet Argus to serve the Burning Legion. Aman'Thul, Khaz'goroth, Norgannon, and Golganneth were tortured by the Coven of Shivarra with the goal of breaking them as Aggramar was. After Argus the Unmaker is defeated, Sargeras strikes out at Azeroth and wounds her heavily in Silithus. Immediately thereafter the Pantheon imprisons him within the Seat of the Pantheon. Illidan Stormrage, who stayed behind while his comrades left, serves as Sargeras's jailer.

Unto you is charged the great task of keeping the purity of time. Know that there is only one true timeline, though there are those who would have it otherwise. You must protect it. Without the truth of time as it is meant to unfold, more will be lost than you can possibly imagine. The fabric of reality will unravel. It is a heavy task--the base of all tasks of this world, for nothing can transpire without time. - Blessing of the Bronze Aspect[15] 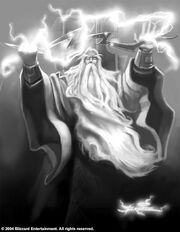 The massive humanoid creature has platinum skin that gleams and shimmers, throwing dancing lights through the air as he moves. His eyes glow yellow, and he holds a great, metallic staff bearing a lightning motif. Violet-yellow electricity plays across the staff.[20]

Aman'Thul is a male Aesir titan. His classes are Healer, Druid of the Wild and Shaman.[21] He wields a staff named Orodur.[20]

Aman'Thul rules the Pantheon — the titan high council. He is the oldest and wisest of his ancient race. Once, Aman'Thul and his brother Sargeras oversaw the creation of innumerable worlds across the Twisting Nether and gently guided countless races to greatness. Sargeras was Aman'Thul's closest advisor and supporter until he turned to evil. Now Aman'Thul looks to his consort Eonar for council. Though the mysterious High Father is rarely seen, every world feels his presence.[20]

As leader of the titans, Aman'Thul is responsible for the creation of all worlds, including Azeroth. All those who revere the titans ultimately pay their respects to the High Father. On Azeroth, explorers have only recently uncovered the titans' existence, and few aside from the Ironforge dwarves venerate them. Dwarves, being a practical lot, show their respect for the titans by delving ever deeper into their mysteries.[22]

When Lei Shen ate Keeper Ra's heart, he absorbed both his powers and the soul fragment of Aman'Thul. When Wrathion ate Lei Shen's heart, he saw countless perfectly ordered planets and millions of stars. This corresponds to the vision the Keepers had when the Pantheon members tried to inhabit their bodies, suggesting Wrathion absorbed the Highfather's soul fragment just as Lei Shen did. This is reinforced by Wrathion saying "WE HAVE FALLEN. WE MUST REBUILD THE FINAL TITAN. DO NOT FORGET." upon absorbing the Keeper's power,[23] which was likely a memory of Aman'Thul speaking of the Pantheon's fate and Azeroth's status.

Aman'Thul was likely inspired by the Greek god Zeus and the Norse god Odin.[24]