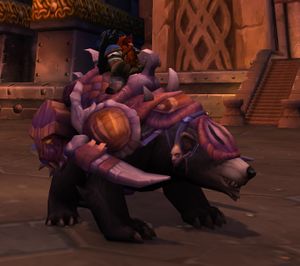 Amani Battle Bear is awarded by the fourth and final scout rescued in Zul'Aman. There is only one mount in the bag, so party members must roll for it or negotiate.

The Amani trolls decorate these ferocious mounts in magic amulets and ceremonial masks as a way to venerate the bear god Nalorakk.