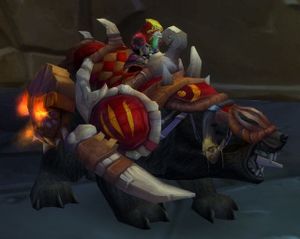 The Amani War Bear is a very rare epic mount. The bear is decorated with tribal arms and decorations and was lootable from the reward chest after successfully doing the timed events in Zul'Aman.

Following the implementation of Patch 3.0.2, the Amani War Bear was removed as the reward and is no longer obtainable by players.

Only the swiftest heroes venturing into the troll temple of Zul'Aman were able to subdue these rare battle mounts.

Having this mount awards the Feat of Strength

[Amani War Bear]. As of patch 4.2.0, it always awards the achievement

Announcement from Tigole, a Blizzard representative:

Once Wrath of the Lich King goes live, you will no longer be able to obtain the Zul'Aman bear mount by saving all 4 prisoners in the timed run. The Bear Mount will be replaced by a very good, epic item that is level appropriate for people doing the zone. To be clear, the Zul'Aman bear mount is supposed to be an item of very high prestige. We want players who have earned it during the appropriate era (aka before the level cap gets raised) to be recognized for their accomplishment. We have absolutely no problem with higher level players (above level 70) going back and doing Zul'Aman after Wrath of the Lich King is live. We just want to preserve the accomplishment of having saved all 4 prisoners at the intended difficulty level.

The Amani War Bear appears as a mount in Heroes of the Storm, where it was added in the same patch as Zul'jin. Despite the name, the Heroes Amani War Bear's coloration bears more resemblance to the

[Amani Battle Bear]. The mount comes in two alternate colors in the form of "Crimson War Bear" (which bears more resemblance to the WoW version of the mount) and "Drakkari War Bear".

The Amani War Bear appears as a common card in the Rastakhan's Rumble expansion for Hearthstone.