The Amani tribe is the remnant of the once great Amani Empire. The famous Warlord Zul'jin was the leader of the tribe for a time.

The Amani'shi is a group within the Amani. 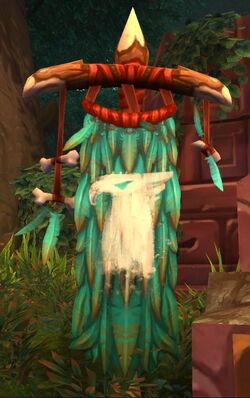 Established long before the Great Sundering, the Amani Empire took its name from the strongest tribe of forest trolls at the time. After the Amani Empire was shattered by the Troll Wars, most forest trolls settled in areas that were a comfortable distance from Quel'Thalas. However, the Amani tribe sneered at such precautions as cowardice. Beset by the high elves' powerful sorcery, Zul'Aman was greatly reduced in size, but the Amani tribe remained entrenched at the easternmost edge of the enchanted kingdom.[1] Ironically, the Amani trolls' magic was originally stronger than the high elves until the elves stole ancient knowledge from troll spellcasters.[2]

When Arthas led the Scourge into Quel'Thalas during the Third War, the Amani tribe witnessed the resulting slaughter with glee. Acting swiftly, the trolls launched a series of attacks on high elf settlements in the Eversong Forest. To the trolls' surprise, the few high elves who had survived the invasion seemed greatly weakened and put up a poor fight. The Amani claimed a significant portion of the forest before the elf Prince Kael'thas Sunstrider arrived in Quel'Thalas. When Kael, his magisters, and their guards arrived to Quel'Danas to destroy the corrupted Sunwell, the Amani tribe also landed on the isle, having been carried by troll destroyers. As the mages destroyed the Sunwell, its blast caught everyone standing near it, troll and undead alike.[4]

Afterward, Kael gathered all the surviving elves he could find and gave them a new name: the blood elves. These blood elves began draining magic from nearby creatures, and they seemed to gain new strength. Even worse, Kael'thas organized them into a fighting force that proved frustratingly effective against the Amani tribe's efforts, even after Kael'thas and his strongest warriors left Quel'Thalas to fight the Scourge elsewhere. In recent days, the blood elves have shown signs of increased magical training and use. The elves' spells have increased in power, and they have rebuilt portions of Quel'Thalas. The blood elves have also begun retaking Eversong Forest. Nevertheless, the Amani tribe remains fiercely dedicated to its battle against the elves, while the diminished elven populace has to continue fighting both the trolls to the east and the Scourge to the south.[1]

The Gods of Zul'Aman

Zul'jin himself had fled to Zul'Aman and began to rebuild his once mighty troll army. After that, the witch doctor Malacrass suggested a way for the Amani to get great power through dark ways, with which Zul'jin in his anger agreed. Having survived his ordeal with the high elves, and indeed the entire Scourge invasion that had crippled much of Quel'Thalas, Zul'jin and the Amani persisted in their goal to wipe the elves out. The high elves, having renamed "blood elves" in honor of their fallen brethren, began to take back much of Quel'Thalas themselves - Zul'jin, seeing this as an opportunity, coordinated a number of attacks on the reforming elves from Tor'Watha and Zeb'Watha, the Amani's holdings in Eversong, and directly out of Zul'Aman in the Ghostlands. However, Zul'jin's ruthless crusade against Quel'Thalas would be halted by an unexpected development - the blood elves officially joining the Horde. Reaffirming his hatred for the outside world, Zul'jin resolved to take down all of his enemies with this dark new power.

Despite being able to draw upon the ghostly spirits of each of the four liberated animal gods from Zul'Aman and being able to change his own shape to assume their powers Zul'jin was slain by adventurers.

To fill the power vacuum left from the death of their warlord, Zul'jin, the remaining trolls chose their favored champion, Daakara the Invincible, to reclaim their lost glory.[5] When Zul called for the Troll tribes to unite to form a new Troll Empire Daakara and the Amani agreed, along with Jin'do and the Gurubashi. In response, Vol'jin of the Darkspear tribe went about dismantling Jin'do's burgeoning empire within Zul'Gurub, and then turned his attention to Zul'Aman to deal with the Amani holdouts.

To this end, Vol'jin joined forces with his Horde ally Ranger General Halduron Brightwing and his Farstriders, and marched to nip the Amani empire in the bud. Overstretched, Halduron called upon Vereesa Windrunner to assist their cause, and the two ranger-generals along with Vol'jin can be seen making their battle preparations on the outskirts of Zul'Aman.

The combined armies request the aid of adventurers to venture into the ancient forest troll capital and put an end to Amani leadership. After deciding an appropriate battle plan Vol'jin personally leads a strike force into Zul'Aman and with the aid of adventurers puts an end to Daakara (severely weakening the Amani even further) and the Zandalari's efforts within Zul'Aman.

The remaining Amani have bolstered the Zandalari forces invading the northern shores of Pandaria, along with the Gurubashi, Drakkari and Farraki tribes. Their strength takes part of Horridon fight and the defense of the Council of Elders.

Members of the Amani live in the enclave of Tal'aman, located at the Port of Zandalar in Zuldazar. They are resistant to the idea of the Horde allying with Zandalar, even going as far as to become hostile over it, but remain subservient to the Empire regardless. To remind them of their place, the Amani's champions, disciples of their loa, are slain by Horde adventurers.

In spite of their clashing with Rastakhan, many Amani Warriors were a part of the procession that mourned him after his death in the Battle of Dazar'alor. They are neutral to the Horde, only fighting back if attacked first.