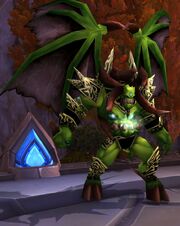 Ambassador Hellmaw is the first boss of the Shadow Labyrinth in Auchindoun. The Cabal feeds him prisoners that have outlived their usefulness.

After his defeat in Outland, he emerged on the alternate Draenor in the past. He was summoned to Shattrath City and resides in Beacon of Sha'tar, tasked with corruption of the draenei crystal known as the

[Light of Exodus]. He is the objective of

A powerful demonic servant and acolyte of pain, Ambassador Hellmaw is dedicated to the art of death. He loves nothing more than the taste of a mortal's lifeblood tinged with horror and despair. Hellmaw is bound by the fel orcs of the Shadow Labyrinth and fed a constant stream of prisoners, bolstering the demon to serve the black will of his masters.

After killing the last of the ritualists Hellmaw will path one time around the room. He will stop where he initially was standing before the last mob was killed, then patrol up and down the northern most hallway indefinitely. It is best to pull the final ritualist far back to the southern entrance into the room. This will give you all the time you need to prepare for the final boss fight.

First, have the Main Tank face him away from the party to minimize the effect of his corrosive acid. He fears fairly often, if the tank gets feared he may lose aggro, or the boss will follow him and hit other players with acid. A priest using

[Fear Ward] can prevent this, a shaman can drop

[Tremor Totem], otherwise the fear effect can be dispelled. Have someone keep track of time, so when there's 5 seconds left on the 25-second timer the healers can cast a couple of HoTs on the tank and move out of range, then get back and dispel if he is affected by fear.

A warrior using Spell Reflection can also avoid the fear - it won't affect the boss, but the warrior won't be either. Warriors can also "stance dance", use berserker stance to avoid fear, paladins can bubble out. Another method is using a warlock's felhunter with devour magic.

You can also tank him in the tunnel leading to the room, so healers will not be feared out of the line of sight of the tank.

Note that since patch 2.3, mobs will often continue to attack feared tanks, making this encounters easier.

This fight is all-over pretty easy even for inexperienced end-game players. The game goes just like before, though 2 healers might be a very good idea for this fight depending on your mana pool. After a few wipes we realized that Hellmaw in heroic mode was actually a timed encounter. An enrage ability activates if you don't kill the boss in maximum 3 minutes, pretty much like Mechano-Lord Capacitus in Mechanar Heroic Mode and one-shots every one by dealing over 30k damage on leather/cloth, 20k on mail and over 10-15k on plate. Heavy DPS is required in order not to wipe against this fairly easy boss. It is suggested to use all dump aggro abilities you might have like Soulshatter for warlocks or Invisibility for mages to keep steady DPS on him. Pulling aggro would result in possible death or losing precious seconds of DPS. Remember that resisting Hellmaw's fear might cause that person to die, it is suggested not to use any Shadow Resistance aura or Protection buff for this encounter.

If you have a Shaman with you, use Tremor Totems and Bloodlust to ensure you have enough DPS to down him. If your group consists of casters, make sure they've got sufficient mana pots.

Intro
Infidels have invaded the sanctuary! Sniveling pests... You have yet to learn the true meaning of agony!

Calling for help
Aid me, you fools, before it's too late!