As hard to pin down at the negotiating table as he is on the battlefield, the Ambassador thrives on taking chances.[1]

Ambassador Jerrikar can use Dark Strike to imbue his attacks with shadow damage, and can also cast a 4-second Silence. At low health he casts Diplomatic Immunity, rendering himself immune to all damage for 6 seconds. He is stunnable. 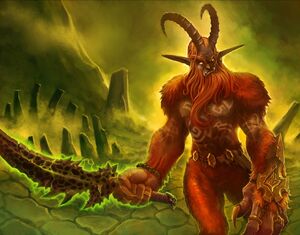 Never forget whom you serve. Illidan will rule this land and beyond.

Ambassador Jerrikar is a criterion of the achievements: