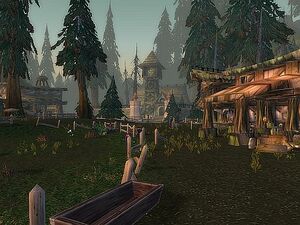 Ambermill (or Amber Mill)[2] was a human town located slightly southwest of Lordamere Lake in Silverpine Forest. It was occupied by the forces of the Kirin Tor[3] who are friendly with the Alliance. It was originally part of kingdom of Gilneas.[4]

Made up of a town hall, a stables, several mills and a lumber mill, Ambermill was a human settlement in the Silverpine. Dalaran wizards lived and protected the inhabitants from the forest's dangers. However the town was eventually taken by the Forsaken. Following the final battle of the Silverpine Forest campaign, the area is inhabited by servitors once more, though the shield is gone. 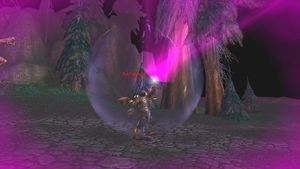 Ataeric tries to hold the power protecting Ambermill in check. 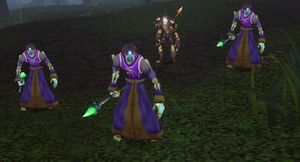 The former residents of Ambermill, including Ataeric, fight for Sylvanas.

Before the building of the Greymane Wall, Ambermill and the nearby Pyrewood were owned by the Gilnean nobleman Darius Crowley. The wall separated them from the rest of Gilneas, causing Crowley to lead a civil war against Genn Greymane that became known at the Northgate rebellion. Ambermill was taken over by Dalaran after it was abandoned by Gilneas.

Prior to the advent of the Third War, Ambermill was a relatively unimportant site in the Silverpine Forest and was mainly used for lumber harvesting, but following the rampage of the Scourge and Burning Legion through the northlands, the rebuilding wizards of Dalaran began to form plans for the strategic use of the town. Ambermill was located atop a dormant ley line energy node,[5] and in order to combat the Forsaken and other menaces, the Kirin Tor attempted to reactivate the node.

Ambermill provided a safe haven for those Alliance adventurers traveling to the Tirisfal Glades and beyond. The Forsaken desire to know why the Kirin Tor have occupied the town, and are just as eager to destroy it.

When the Forsaken conquered Silverpine Forest, the inhabitants of Ambermill shifted their entire town to a pocket dimension to keep the Forsaken at bay. It is revealed that they were plotting to return to aid the Alliance in its invasion of Lordaeron when more reinforcements arrived.[6]

The town was only accessible from a dimensional portal in Beren's Peril but it could only be entered by one person with a Dalaran Archmage's Signet Ring.[7] Outside the pocket dimension, Ambermill magi created Elemental Servitors to protect their territories from the Forsaken.[8] One Horde adventurer entered the portal on behalf of Sylvanas Windrunner and killed many Ambermill magi and Archmage Ataeric, the human responsible for keeping the pocket dimension active. With Ataeric killed, the town returned to Azeroth, leaving it open for the Forsaken to invade.

[18] Transdimensional Warfare: Chapter II, the town is subsequently taken by the Forsaken as a part of a quest chain. The inhabitants who were slain, including Ataeric, were risen as Forsaken. The former residents of Ambermill, including Ataeric, appear during the final battle in Silverpine at the end of the Horde questing experience in that zone, contributing to a Forsaken victory and making it clear where their loyalties lie (for now) in undeath.

Ambermill is the only human settlement in Silverpine, unless you count the worgen-infested Pyrewood. Dalaran soldiers protect the inhabitants from Forsaken and the forest's other dangers. Ambermill is a haven for the Dalaran wizards who frequently survey the forest. The Dead Wolf Inn serves a mean bowl of venison stew.[9]