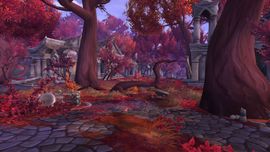 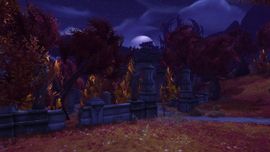 The gate to Ambervale and Falanaar

Ambervale is a ruined town located between Meredil and Falanaar in the region of Suramar. The area has likely been abandoned for many thousands of years, and has since fallen into a state of disrepair. Ambervale's elven architecture is largely run-down, and the town itself is overgrown with trees and other vegetation. The layout is like a typical suburb, with houses spaced along a road leading to Koralune Manor. In recent times, Ambervale has been overrun by numerous pests, including rats, ettins, and a large number of withered exiles from Suramar City.

Banished from the city, the nightborne Arcanist Kel'danath settled down in Koralune Manor in order to continue his studies on the local withered.[1] Despite promising advances, the arcanist eventually succumbed to the withered state himself. The decay of Ambervale has been accelerated by Elfbane and the local ettins, who are demolishing the area in search of food.