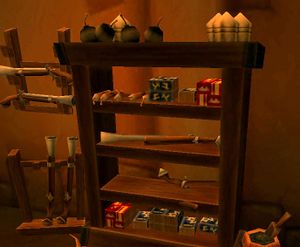 Ammunition was used by ranged weapons such as bows, guns, and crossbows. It was sold by vendors in stacks of 200, but stacked up to 1000 in your inventory.

[Thorium Shells] could be traded for Thorium Headed Arrows in Ironforge/Orgrimmar near the innkeeper/mining trainer, respectively.

Arrows were ammo for bows and crossbows. Better arrows had better DPS bonuses.

Bullets were ammo for Guns. Better bullets had better DPS bonuses. Pellets, Pebbles, Shells, Shot, and Slugs are all types of bullets.

As of April 2010, ammunition is planned to be removed for Cataclysm. The original plan to replace the current mechanic of mandatory per-shot consumable ammunition with "some new functionality that would continue to make ammunition a compelling element of game-play",[1] although announced as to be implemented in the patch 3.1.0, was delayed. During Blizzcon 2009, it was mentioned as one of the changes planned for Cataclysm. Either their plans didn't work as intended or they gave up on it, either way the plans were scrapped and it was decided that ammo would just be completely removed from the game. The existing ammunition bags will turn into large normal bags (amount of slots is unknown), but only if they're on hunters at the time of the change.

A major change coming for the hunter is the removal of ammunition. Guns, bows, and crossbows will now do damage without consuming ammunition at all. There will be no more ammo slot on the hunter’s character display. Any ammunition that a hunter has at the time of the change will become gray sellable items. Existing quivers will be converted into large bags -- though each hunter can only have one and non-hunters will not benefit from this change -- and we will not be making any additional quivers.