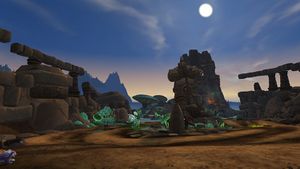 Amphitheater of Annihilation is a sub-zone in northwestern Ashran,[37, 35] 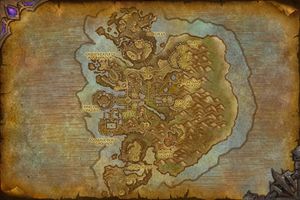 A watery zone home to sporelings, podlings, sporebats and fungal giants. Flytraps and Slippery Slimes can be found here to augment the powers of opportunistic adventurers. The inhabitants of this area are known as "the Shapers".[1]

The Amphitheater is the closest point of the island to mainland Draenor, and the giant mushrooms that form a broken causeway between the two can be found here, leading off across the Barrier Sea to the distant Tanaan Jungle. Apparently once the seat of some kind of combat or contest, this ancient ogre Amphitheater has long since given way to the encroaching ocean and plant life, with the Primals that make their home here either coming with it, or actively seeking to aid its progress across the zone.

The main area of the zone comprises a kind of circuit around a massive ogre statue, while on the northwest edge of the circuit stands a crumbling yet still imposing structure, now home only to shambling Marsh Creatures. While the southeast of the zone is relatively dry, to the northwest the land gives way entirely to the sea, outcroppings of rock serving to extend the zone beyond the Amphitheater itself. The southeast exit from the Amphitheater leads across an ancient courtyard toward Kings' Rest, through which the island's other western zones can be accessed. To the northeast, a smaller exit leads out to the beach, an eastern path leading past the Horde Mine Entrance up to Emberfall Tower, where the Horde prepare their advance across the zone. Directly to the north Warspear itself can be glimpsed in the distance.

Racing! is the event that takes place in the Amphitheater.

Around the center of the area trawl two mighty riders - the Horde rider atop a giant clefthoof, the Alliance rider atop a mighty elekk - slowly doing laps of the Amphitheater. The riders move very slowly, but for each player of their faction within their vicinity their speed is increased by 30%, allowing them to outstrip their competitor. The first faction to complete 3 laps wins the event. The escorting of the riders is complexified by the presence of the mobs in the area, causing racing players to frequently incur the wrath of the local inhabitants. The riders cannot be attacked.

Slippery Slimes are rare spawns which sometimes appear here, moving in rapid laps around the area. If interacted with, the Slimes despawn and grant the 15-minute Slippery Slime buff, which persists through death. Every so often, the buff activates the Slippery Slime effect, increasing the player's movement speed by 150% (to 250%). The speed increase works while mounted or unmounted, and lasts for a few seconds, meaning the buff is often active a fairly large portion of the time.

While the Slimes spawn fairly infrequently, the buff can be extremely useful for a variety of purposes. It can help players to traverse the map far more quickly than usually possible; to chase down fleeing opponents; to reach allies or join the fray more quickly; and to escape attackers. The buff is perhaps most remarkable in this last capacity, especially when seeking to evade world PvP encounters. The combination of the buff with regular evasive class abilities can allow the player to outrun even the most skilled and persistent hunter or warrior.

Flytraps are special static mobs which generate a Flytrap Toxins aura in the immediate vicinity, increasing damage dealt and taken by players by 50%.

The corpses of the Marsh Creatures here generate a special aura, increasing the haste of nearby players by 50%. 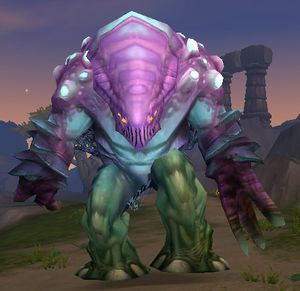 An early map of Ashran shows this area marked "Forge". During the expansion's beta, it was known as "The Stadium".