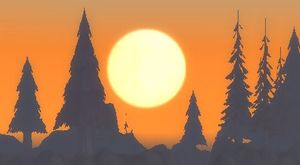 Once the right eye of the Earth Mother, An'she was torn out and sent spinning across the heavens, chased eternally by Azeroth's most visible moon, known to the tauren as Mu'sha.[3] Every morning An'she bleeds, sacrificing part of his light to let the tauren know that dawn is coming. But he doesn't do this alone; the yeena'e ("those who herald the dawn" in Taur-ahe) help him.[4] It is said that long ago, An'she himself kissed the mountain where Sun Rock Retreat‎ now stands.[5]

Tauren priests (known as Seers), and paladins (known as Sunwalkers) aim to revere the light of hope that the Earth Mother shines upon the world, through the use of An'she's power.[6] Tahu Sagewind implies that such a focus on An'she, as opposed to the power of Mu'sha used by druids and night elves, could achieve the balance of the Earth Mother, granting the tauren another blessing from her.

In Cataclysm, the power of An'she can appear either as red flames emerging from a while-hot source or as golden magic similar to other divine magic.[7] Tauren seem to use the terms "Sun", "Light" or both as synonyms for An'she.

Anduin Wrynn considers An'she to be another expression of the Holy Light.[8]

Important to any understanding of tauren priests and paladins is the terminology tauren use to refer to their newfound powers, as well as what they call its practitioners. Due to the game mechanics of World of Warcraft, all quest texts and /says can be presumed to be said in Common unless otherwise stated, even if they are from a tauren NPC to another tauren (it is either difficult or impossible for NPCs to make the distinction between different races within the same quest). As such, the term 'priest' when said by tauren NPCS may in-fact be a Common translation of a Taur-ahe word, literal or not (for example, it may be a translation of the Taur-ahe word for "Seer" to a term a blood elf would understand the full meaning of, and not just the symbolism of a "see-er": the Common word 'Priest'). 'Sunwalker', 'Paladin', 'Sun' and 'Light' may also be of this nature within the game.

Tauren Seers have been in the lore since before World of Warcraft: Cataclysm, and even Wrath of the Lich King, when Tahu Sagewind and Aponi Brightmane explain why tauren priests and paladins will become playable. These Tauren Seers were noted to be healers, but the source of their power was not elaborated on.[9] With Cataclysm, tauren priests are known in-game as Seers – this seems to indicate that tauren priests, like the new gnome priests, are not new to the lore but were instead merely unplayable race/class combinations before now. Tahu Sagewind's words may suggest that a focus on An'she as well as Mu'sha, and therefore the idea of wielding the sun's power, isn't a concept new to the tauren.[10] This path to revering the Earth Mother could have been already known to the tauren (most likely to traditional healers, the Seers), and has simply been rediscovered. Paladins too may have existed in some form or another before Cataclysm, perhaps with much less refined and effective knowledge of An'she.

Alternatively, these Seers may have been traditional tauren healers without magical abilities. If so, they have only now become what other races would call 'priests' with the adoption of magical healing skills. This is supported by Seer Ravenfeather in the new tauren starting experience.[11]

Relation to the Holy Light and other divine magics

“You will find that the Light and the Earthmother have more in common than you think.”

An'she and the sun may be the tauren interpretation of the Holy Light, or another form of divine magic coming from a separate, if possibly related source. Tauren priests and paladins may have taken inspiration from their contemporaries among the newer races to Kalimdor and the Horde - some may even consider their magics to be one and the same. Priest NPCs other than Tahu Sagewind refer to a "Light", which could be a reference to the faith of the humans and elves of the Eastern Kingdoms. In contrast, Tauren paladins do not refer to "Light" without mentioning the sun. However, as Sagewind developed his ideas on An'she alongside Aponi Brightmane, apparent head of the Sunwalkers, it is unlikely that tauren priests actually have a radically different take on their powers from these paladins. "Light", like "Sun", is more likely to be a synonym for An'she or even a translation to Common.

Given the relatively unknown nature of the Holy Light, the powers of tauren priests and paladins could very well ultimately come from the Light. The Light does not discriminate based on race and does not truly bend to the will of others (no matter what groups may think otherwise), and since most of the tauren people already embody the virtues often held in great regard by many paladins, it is not difficult to envision that the tauren could easily obtain the powers of the Light. They may even be gifted it by the Light itself without them knowing it is the same power as that wielded by other races.