Use the Orb of the Crawler to spy upon the new Twilight camp to the west of the Blackfathom Deeps entrance on the Zoram Strand in Ashenvale, then summon the Earthen Ring Guide using the

According to this, it seems there is another encampment of the cultists to the northwest of the large gathering on the Zoram Strand, and they are speaking with... guests?

Much could be learned from listening to these proceedings, <race>. Take this orb; it will allow you to appear as one of the native crawlers on the beach. Spy on the conversation with these "guests" of the cultists at the northwestern camp and report back to me when you are successful.

Have you learned their secrets?

They seek to summon a frost lord into our world? No! They cannot tip the balance! 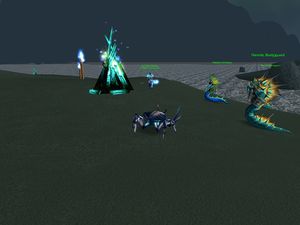 Return to the Zoram Strand and head west following the braziers, then turn north once reaching the ocean. Use the

[Orb of the Crawler] after nearing the bonfires, Ice Stones and the NPCs.

Ice Caller Briatha says: These stones should be the last of them. Our coordination with Neptulon's forces will be impeccable.
Heretic Emissary says: Yess. The Tidehunter will be pleased at this development. The Firelord's hold will weaken.
Ice Caller Briatha says: And your own preparations? Will the Frost Lord have a path to the portal?
Heretic Emissary says: Skar'this has informed us well. We have worked our way into the slave pens and await your cryomancerss.
Ice Caller Briatha says: The ritual in Coilfang will bring Ahune through once he is fully prepared, and the resulting clash between Firelord and Frostlord will rend the foundations of this world. Our ultimate goals are in reach at last...

There was initially a problem at the end of this quest. The next quest in the chain is a quest called "Inform the Elder", but although it was possible for all players to get the preceding quests, Inform the Elder could not be acquired by anybody lower than level 70. This effectively meant that all the lower level daily quests would never be available, since their prerequisite quest wasn't available. This was fixed in a server restart hotfix in the early hours of June 21, 2008.

Players then are given access to quests based on their level: