Anachronos the Ancient[4] is the child and heir of Nozdormu the Timeless One and as such is a prominent member of the bronze flight.

During the War of the Shifting Sands, Fandral Staghelm sought the aid of the elusive bronze dragonflight. Initialially the Bronzes refused, but their decision was reversed when the brazen qiraji attacked the Caverns of Time. Nozdormu's heir, Anachronos, agreed to enlist the bronze dragonflight against the marauding qiraji.

Even with the might of the dragons backing them, however, the sheer numbers of the qiraji and silithid proved overwhelming. And so Anachronos called upon the progeny of the remaining flights: Merithra, child of Ysera of the green flight; Caelestrasz, child of Alexstrasza from the red, and Arygos, child of Malygos from the blue.

The dragons and winged qiraji clashed in the cloudless sky above Silithus. It is rumored that the dragons flying above the ancient city from which the qiraji emerged saw something distressing there; something that hinted at a more ancient, terrifying presence behind the onslaught of the insect race. It was this revelation that spurred the dragons and Staghelm to hatch their final, desperate plan: to contain the qiraji within the city, to erect a barrier that would confine them until a more hopeful stratagem could be devised.

The final push to the city began. High above, the dragons were making short work of the insect soldiers. As one the night elves and dragons formed a moving wall which pressed the qiraji back toward the city of Ahn'Qiraj. But near the city gates, the tide turned, and it was all the combined forces could do to hold the line. To push any further would be impossible. Merithra, Caelestrasz and Arygos decided to push into the city and hold the qiraji back long enough for Anachronos, Fandral, and the remaining druids and priestesses to create the magical barrier. And so the three dragons and their companions flew headlong into the qiraji legions, into the city where they hoped their sacrifice would not be in vain.

Outside the gates Fandral called upon the druids to focus their energies as Anachronos summoned the enchanted barricade. Beyond the gates, the three dragon progeny succumbed to the overwhelming forces as the qiraji surged forth. The barrier erected itself before their eyes, rock and stone and roots from beneath the sands emerging to create an impenetrable wall. Even the winged soldiers who attempted to fly over the barrier met with an invisible obstruction that they could not pass. The qiraji who remained outside the wall were quickly slain. The corpses of qiraji, night elves and dragons littered the bloody sands.

Anachronos motioned to a scarab scuttling below his feet. The creature froze, then flattened out, transforming into a metallic gong. Stones shifted into place near the wall, creating a dais where the gong was finally placed. The great dragon then proceeded to the severed limb of one of his fallen companions. He held the appendage and, after a series of incantations, the limb morphed into the shape of a scepter. The dragon told Fandral that should any mortal ever wish to pass the magical barrier and access the ancient city, they need only strike the scepter against the gong and the gates would open. He then handed the scepter to the Arch-Druid. Fandral looked down, his face twisting in contempt, still mourning his son's recent death.

Lord Staghelm, in a fit of rage and grief, shattered the Scepter of the Shifting Sands. Anachronos was taken aback as the Night Elf stormed off, damning Silithus, the Qiraj, and the dragons for his son's death. Disappointed, Anachronos took the four shards of the sceptre and entrusted each shard to a member of the four flights, including himself. From the red he chose Vaelastrasz, from the blue he chose Azuregos, and from the green, Eranikus.

Now, 1000 years later, he is still guarding the Caverns of Time in Tanaris. Anachronos now seeks to finish the war with the qiraji. Little did he know back then that all three scepter guardians, whether by agents of the Old Gods or betrayal by those that would call them friend, would fall to tragedy. His agent, Baristolth of the Shifting Sands, whom he blessed with immortality, seeks a mortal champion to recombine the scepter and open the Gates of Ahn'Qiraj. A transcript of the final events of the war as shown to Anachronos' chosen champion can be found in the quest

Twilight of the Aspects

When Thrall rescued and returned Nozdormu to the Caverns of Time, Anachronos alongside others bronze dragons were present observing their Aspect. Anachronos also thought that Krasus had betrayed the flights by destroying the Sanctums.

Ever since the death of the Dragon Aspect Malygos, the blue dragonflight has struggled with appointing a new leader. Its members are now torn between the two likeliest successors: Kalecgos, who champions reconciliation with other races; and Arygos, a scion of Malygos who believes that his kind should withdraw from the world and forge a new path. To end the constant debates and arguments, the flight has agreed to gather during the Embrace — an extraordinary celestial event in which Azeroth's two moons come into perfect alignment—in the hopes that a new Aspect will be selected.

Yet a recent discovery by the bronze dragon Anachronos bodes ill for this impending ceremony. The timeless dragon has detected sinister magic at work around the Nexus, the blue flight's frozen lair in Northrend. Along with this find, he has glimpsed a terrifying vision of Azeroth succumbing to flames. The link between this chilling portent and the blue dragons remains unclear, but Anachronos has called upon what some of his kind deem the "short-lived" races to investigate further. If a hero does not rise to the challenge and find the truth, Anachronos's dire vision of Azeroth's undoing could become reality. Bronze Dragonflight emissaries will be sent to the Alliance and Horde capital cities of Stormwind and Orgrimmar to recruit those who are ready to undertake the challenge.[5]

During the Legion Invasions of Tanaris, he defended the entrance to the Caverns of Time. 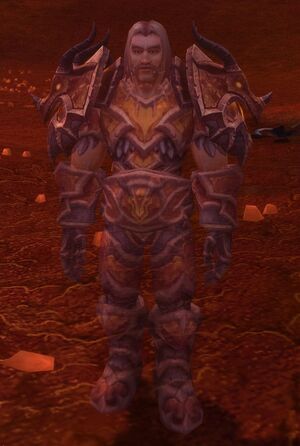 Anachronos at the Dark Portal.

Sometime during the Fourth War, Eitrigg sought to travel to the alternate Draenor to recruit the Mag'har orc clans that the Horde saved from Garrosh Hellscream's meddling and the Burning Legion's corruption. However, the shard of

[Vision of Time] in his possession was depleted of its energy and thus the Horde turned to the bronze dragonflight to see if they would help them in their quest. Upon being approached by the Horde champion, Anachronos merely remarked that the time had come for their visit.[6] Agreeing to aid the Horde in their quest, Anachronos had the shard of the Vision of Time empowered by defeating the echoes of Gul'dan, Warlord Zaela, and Garrosh Hellscream. Upon the defeat of Hellscream's echo, Anachronos revealed that he sensed the threads of fate upon the Horde champion and proclaimed that they were worthy of what is to come next and that had there been any doubt he would have never allowed the shard to fall into the wrong hands again.[7]

Anachronos is a level ?? quest giver located in the Caverns of Time in the contested territory of Tanaris. He will not speak to you unless you are neutral with his faction, the Brood of Nozdormu.

Signet Ring of the Bronze Dragonflight 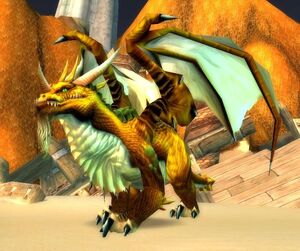 At the Caverns of Time. 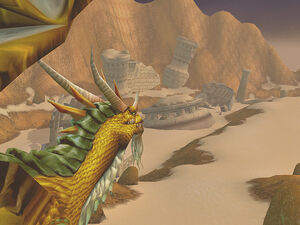 Looking out over Tanaris.

[The Scepter of the Shifting Sands] quest chain

[Atiesh, Greatstaff of the Guardian]

It is we who must make the first strike. We cannot be allowed to repeat the mistakes of the past...

That Anachronos has been established as the heir of Nozdormu is unusual, though not truly surprising. Nozdormu knows exactly where and when he will perish, and as such, would need to appoint a successor to his sacred mission well in advance. The other Aspects would have less of a need for directly designated successors. That Anachronos has been named an heir implies that his mother is likely Soridormi, Nozdormu's Prime Mate.