Anatomy of a City: Silvermoon

The Insider recently sat down with the World of Warcraft design team and learned more about Silvermoon City, one of the two new capitals that will be introduced in World of Warcraft: The Burning Crusade. Read on to see the ideas that led to the rise of the blood elf capital, and its rebirth from the ashes of the Third War...

The rich and detailed history of Silvermoon City provided the dev team with a wealth of possibilities from which to weave the blood elves' mystically-charged capital. One of the central themes of Silvermoon is the idea that it is the scarred descendent of a once-proud elven metropolis. When Arthas and the Scourge plowed through the defenses of Silvermoon during the Third War (a tragic event that occurred in the timeline of Warcraft III: The Reign of Chaos), they tore a path of destruction through the city and the surrounding landscape. In The Burning Crusade. This translates into a divided Silvermoon. The blood elves' capital is split in half, with one side recently restored to its former grandeur, while the other is abandoned and left to ruin.

Before the coming of the Scourge, Silvermoon City was the heart and the capital of Quel'Thalas, the high elves' magic kingdom. Quel'Thalas was an idyllic sanctuary in where the high elves could pursue their arcane studies. For close to seven millennia, the elven kingdom and its capital Silvermoon stood, and the homeland of the high elves flourished. But all this changed when the Scourge came to claim the most sacred and precious possession of the High Elven nation – the arcane energies of the Sunwell, located at the heart of Silvermoon. By the time Arthas and his army of the dead turned southward, no one remained in Quel'Thalas – at least no one living.

With the design of Silvermoon City, the dev team sought to capture this pivotal event in blood elf history. In a way, Silvermoon also serves as a look into the psyche of the blood elves as a whole, and as we'll see, not everything is quite right in the newly rebuilt capital.

Mirror, Mirror, on the Wall 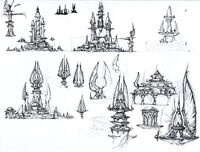 What does elven architecture look like? In previous Warcraft games, players could only catch brief glimpses of the magnificent and otherworldly constructions of Azeroth's high elves. As players led their armies through the forests of Quel'Thalas or whittled down the high elves' defenses in Warcraft III, they caught brief peeks at elven structures. In World of Warcraft: The Burning Crusade, players will be able to take a much more detailed look at the blood elf way of life.

The blood elves are trapped in a struggle with their hunger for magic, caught between mastering this desire or letting it master them, and the duality of Silvermoon reflects their inner struggle. One side ruined, one side restored to its former glory; magnificent on the outside, lingering darkness on the inside. Small details like floating flowerpots and the omnipresent glowing green crystals further underline the idea that the rulers of this city are completely drunk on magic. But the truly interesting insights reveal themselves when players look closer at what is going on in Silvermoon City. Beyond the luscious avenues, behind the rich billowing curtains, lie dark and gloomy interiors, and those who explore the other side of Silvermoon City may find that the city's beautiful façade serves only to hide the true, more-sinister side of the city...

We Built This City 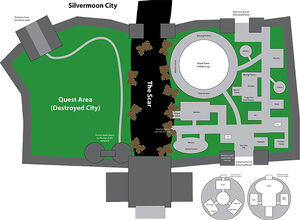 The dev team closely examined the original cities from World of Warcraft when designing Silvermoon, and the lessons they've learned since the launch of the original game informed its creation at every level. One key lesson learned from the current cities is that many players tend to gather around a few points of interest: mailboxes, auction houses, banks, flight paths, and inns. This can result in a noticeable slowdown for those entering one of these hotspots; and falling into the infamous trench in Ironforge has been the unfortunate fate of many a hero. The way the dev team approached this challenge while designing Silvermoon was to spread out the traditional crowd magnets. Silvermoon City features two auction houses, two banks, two inns, and eleven mailboxes. Also, the flight master resides outside the city, so new arrivals won't be dropped into a huge crowd of players upon their arrival. 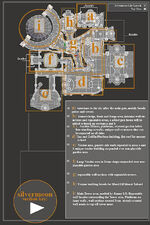 Another approach to crowd control involved taking a closer look at how the general "flow" of a virtual city could be improved. Take the Undercity, for example. This city was designed around a circular layout, and for the most part this works well. However, there more obvious visual clues would be helpful to let players know immediately what part of the city they are in. So for Silvermoon, the dev team worked extra hard to make sure that players would always know where they were and where to go. The warlock district, for example, has a very distinct, dark color scheme, while the hunter trainers are marked with an impressive gold statue of an elven huntress outside their building. Also, the Sunfury Spire is a prominent landmark in Silvermoon that should help players find their way around the city. No matter where a player is, the silhouette of this impressive structure will always be visible in the distance.

All the Small Things

Now that we've discussed some of the basic themes and ideas behind Silvermoon City, let's take a look at some of the smaller details that truly make the city come to life.

Players of Warcraft III will probably remember that the high elves used golems to protect the Sunwell; the blood elves are continuing this practice by using golems to patrol the streets of their fair city. Their golems are a little more advanced (and shinier) than the original protectors of Silvermoon. These magically-automated guardians also constantly remind everyone in the city of the of the blood elves' leader and savior, Prince Kael'thas, by reciting lines of carefully-worded propaganda. This helps prevent the blood elven denizens of the city from forgetting to whom they owe their absolute loyalty. There are also several unique NPCs walking the streets of Silvermoon, like two magi engaged in a polymorph battle, or the diplomatic emissaries representing the Horde (a reflection of the recent change in faction loyalties).

Another major design challenge was to make Silvermoon City easy to get to even at higher levels, despite the fact that players will often be adventuring in the far corners of the world. Most blood elf players will likely spend a lot of their time in Silvermoon City from level six to the early twenties, but there may be quests there all the way up to level 70. So, Undercity and Silvermoon City will be linked by a portal located just outside the city walls of the Forsaken capital, allowing players to hop off the zeppelin and teleport directly to the blood elves' capital.

The Earth and the Sky and the Water, Remade, Like a Casket of Gold 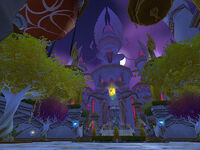 Silvermoon City is a study in contrast, a place where beauty and horror live side by side, where the hopes for a bright present are overshadowed by the dark memories of its tortured past. Demonic powers and magical mysteries abound in its streets, and adventure is only a whisper away. The dev team has sought to build a city that captures the strong design philosophies exhibited by the other capitals of Azeroth, while blending these with new and exciting ideas. Blizzard awaits with great interest your first steps down the sunny streets of the Bazaar, your slightly concerned strolls through Murder Row, and your first sights of the magnificent fountains in the Court of the Sun.