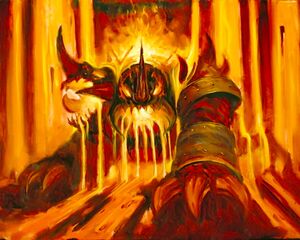 Basic strategy is to simply have one tank at the front of the beast and everyone else behind. About the only AE worth dispelling is the 200FR debuff as that can greatly increase the damage taken from his fire AE. This mob goes down very fast and we don't bother with them too much anymore since they don't respawn once Magmadar is dead.

You should have another tank (with FR) ready to tank the dog. Since some of its abilities (like the fear and stun) cause the tank to temporarily lose aggro, it might wander into the clothies area, and bake them.

When we get an Ancient Core Hound add, we move quickly to reach it before it gets to the camp. You do not want a Core Hound in camp casting an AE stun or confusion when already engaged with another mob. Two healers is sufficient to keep a tank up on one of these.

Special Note for Ranged DPS: If you have points in any talents that increase the maximum range of your spells or attacks you may be able to avoid the AoE debuff. After the MT has established aggro, simply back up as far away from the hound as you can. Be careful doing this. If the MT is afflicted with Ancient Despair, the hound will run straight for you.

Reputation: 20 reputation with the Hydraxian Waterlords until the end of Honored.

[Core Leather], along with

[Rugged Hide]. Like normal skinning, the corpse must be looted in order to skin it. (310 Skinning skill req'd.) Many guilds assign one skinner to skin all core hounds and send the leather to the guild bank. This often leads to the Raid Leader or Assigned Skinner reminding the raid to "Loot the Dog!"

Hunters with the 31 talent point

[Exotic Beasts] can tame these as exotic beasts, though it is not without difficulty. They hit hard enough that constant heals on the hunter are necessary, which runs the risk of breaking

[Tame Beast] if the healer pulls aggro. The best method is to have the hunter build up a decent aggro lead before attempting to tame it, with the healer only healing when necessary and minimizing overhealing as much as possible. Bringing along an additional hunter or two to use