From Wowpedia
(Redirected from Ancient guardian)
Jump to: navigation, search

For the demigod-like trees, see ancient. For the collection, see Ancient collection.

From the dawn of its reshaping by the mysterious titans, Azeroth had been guarded by demigod[6] beings who were tied to the world as no other creatures could be. The dragons had been empowered by the titans, but Azeroth itself gave rise to the spirits and demigods, creatures eternal in nature yet capable of ultimate sacrifice.[7]

Loa is the word that trolls use to refer to powerful spirits they revere, this includes the Wild Gods.[8] Troll druids visiting Moonglade have been overheard calling the wisps who reside there loa, just as they refer to Goldrinn, Aviana, and the other returned Ancients as loa. Night elves and tauren have tried to counsel these trolls on "correct" druidic nomenclature, but the trolls thus far have been stuck in their ways.[9]

As they were a fierce opponent for the Burning Legion in the War of the Ancients, the demons had Cenarius killed in the Third War. This resulted in the seclusion of the Wild Gods. Malfurion Stormrage sent his druids to rally them and bring them into the field. The death of Cenarius, however, made them almost impossible to find. Ultimately, the druids were unsuccessful.[10]

The Twilight's Hammer feared that the Ancient Guardians may someday rise up to oppose them. They created twisted versions of the Ancients, summoned to replace them. They were a primal force of nature, but their origins were from a darker place. Those who birthed these beasts reached deep into the blackness, channeling powers never intended for this world.[26] The Twilight's Hammer dreamed of creating their own pantheon of twisted ancients to rule over the land, sea, and air,[27] though only two were summoned before the Twilight's Hammer was stopped. 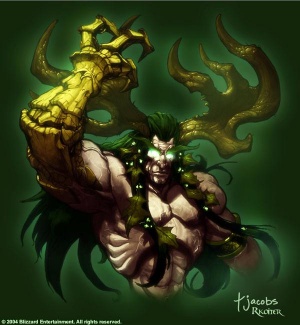 Cenarius, patron of the Druids

Brann also speculated on the existence of a few Ancients and their creation of descendant races:[28]

Brann Bronzebeard has confirmed that several races originate from the ancients.[28]

Night elf culture speaks of both ancients and Ancients (note the capital A). Ancients (lower-case) are treelike sages and protectors. Ancients (upper-case) are old demigods, like Cenarius, who assisted the night elves at various points throughout their history.[29]

Perhaps more so than other Eternals, the Ancients of the night elves are treated like deities. Primal spirits of the natural world when it was young, they personify its most distinct and most powerful qualities. Although several of them were effectively destroyed during the War of the Ancients and in later conflicts, they are honored still by races such as centaur, furbolgs, night elves and quilboar. Elune the Moon Goddess, Azeroth's one true deity, remains a focus of worship for the night elves and other races, while the world grows warier of what the changed Queen Azshara may attempt in the coming future.[30]

Most of the inhabitants of northern Kalimdor — namely the night elves, but also the furbolgs and the satyrs — worship or revere the Ancients. The night elves worship Azeroth's only deity, the eternal moon goddess Elune. They revere most of the other Ancients, especially Cenarius, the only Ancient to spend considerable time on the physical plane. They also honor the moon goddess's companions, including Agamaggan, Aviana and Malorne. The furbolgs venerate the bear twins, Ursoc and Ursol; and the evil satyrs revere Lord Xavius. The Ancients rarely interfere with life on Azeroth, but these races hold fast in their fervent beliefs that the Ancients exist and are watching events unfold.[31] The following are characters stated to be Ancients only in the RPG: