This article is about the race as a whole. For the Warcraft III unit, see Ancient of Wind (Warcraft III). 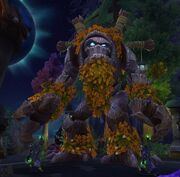 Ancients of Wind (or Ancients of the wind) are ancients who are able to tap into the more feral side of nature. They allow contact with the Druids of the Talon and provide a location for the taming of hippogryphs.[1]

These ancients suffered heavy losses during the Third War and subsequently returned to the forests to spread their seeds and replenish their numbers undisturbed.[2] The Battle for Darkshore marked their first appearance since the Third War.

Ancients of wind guard the nesting grounds for the mighty hippogryphs.[3]

Ancients of wind assist ancients of lore in the training of night elf druids. They excel especially at teaching night elves to train and ride hippogryphs, and the druids of the talon revere them as their key mentors. Ancients of wind avoid combat; but like other ancients, when enemies threaten nature, they battle with their allies. They use their spells to confound their enemies; as their name implies, they favor wind-based spells like cyclone. This ancient turns its hawk-like head with surprising quickness.[4]