Ancient of the Arcane 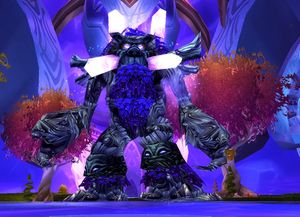 Ancient of the Arcane.

Ancients of the Arcane[1][2] are large ancients resembling Ancients of War, but with arcane crystals protruding from their bodies. Their origins are unknown but they seem to be quite intelligent.

They can be regrown from a single, small clipping.[1]

Only three are known to exist:

The subject of this section did not make it out of the beta stages of Legion.

Given the introduction of Old Crystalbark in the heavily concentrated arcane area of Coldarra, it's possible these ancients exist where magic is most present. Since the night elves had abandoned such things, seeing an Ancient of Arcane would have been an extremely rare occurrence in Darnassus. This, however, could change when the Shen'dralar are welcomed back. For example, Arcosin is affiliated with Darnassus and resides at the Tower of Estulan, which is staffed predominately by the Shen'dralar.

The Warp Splinter seems to be a twisted creation by Kael'thas' blood elf researchers in the Botanica. Deriving from the blood elves' research on the naaru technology present in Tempest Keep, and its effect upon living beings, the Warp Splinter seems to consist of both naaru crystals and what would otherwise be an ancient. Apparently the power contained by the Warp Splinter was too much for both the elves and the Splinter itself to handle, causing the nearby experiments to run amok and overpower the researchers. The Splinter itself is clearly confused with whether to refrain from fighting or to defeat the players, possibly due to its mind being twisted as well.

The night elves do not have any reservations about the existence of these ancients, or that they represent the arcane, seeing as their own druids wish to regrow Warp Splinter, this time free of all corruption.[1] It may simply be that regular night elves do not need them, and as such do not actively seek to grow them.