From Wowpedia
(Redirected from Andrassil)
Jump to: navigation, search

Not to be confused with Aldrassil. 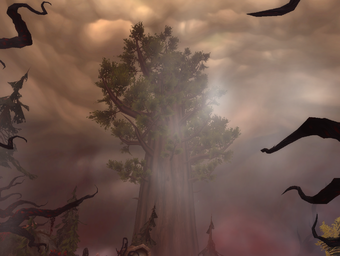 Andrassil as seen within the Emerald Nightmare.

Vordrassil, meaning "Broken Crown" in Darnassian,[1] are the remains of a World Tree located in the Grizzly Hills of southern Northrend. Originally called Andrassil, meaning the "Crown of the Snow",[1] it was grown from a branch taken from Nordrassil by Fandral Staghelm and his druids in order to stop the spread of saronite in the northern continent. Without the blessings of the Aspects however, it was vulnerable to the Old Gods' corruption. The ancient druids were forced to fell the tree, which they renamed Vordrassil.

Within the Emerald Dream, Andrassil still stands tall, even as the Emerald Nightmare corrupts the rest of the area.[4]

Parts of the tree include: Vordrassil's Heart, Limb, Tears, and a passage through a major portion of the trunk.

4,500 years before the First War, Fandral Staghelm took branches from Nordrassil, the World Tree, and planted them over saronite that had begun to appear across the world. The largest tree grew over a particularly large saronite deposit in the Grizzly Hills; Fandral and his druids named it Andrassil, or "Crown of the Snow". Malfurion Stormrage and the rest of the Cenarion Circle became furious upon learning that these branches had been planted without their approval. They did, however, agree that the plan seemed to have worked. For several decades, Andrassil towered over Northrend, and all seemed well. Yet in time, circumstances changed. Bloody battles erupted between the taunka and the forest nymphs of Northrend, two races not known for their warring ways. The fighting was sudden and shockingly vicious, filled with barbarism and unspeakably vile acts. Word slowly reached the druids, and the Cenarion Circle launched an expedition to investigate the source of the violence.

What the druids found chilled them to their marrow. Andrassil's roots had reached so deep into the earth that they had touched Yogg-Saron's subterranean prison. The Old God had infused the tree with its foul energies, and thus all living creatures in the area were slowly being driven to madness. The Cenarion Circle knew that, without the blessing of the Aspects, Andrassil was vulnerable to corruption. They were also aware that there was no way to spare the World Tree or ease its suffering, so they decided that the only recourse was to destroy Andrassil. Afterwards it was renamed Vordrassil, or "Broken Crown."

Although killing Andrassil had been a heartbreaking task, the Cenarion Circle was pleased it had stopped the growth of saronite. Yet unbeknownst to the druids, something dark had taken root in the Emerald Dream. Yogg-Saron had used the trees planted by Fandral as a doorway into the Dream - a doorway through which the other Old Gods could grasp the ethereal domain and well. Small seeds of corruption were spread throughout Ysera's realm. In time, these seeds polluted the dreamways. This marked the beginning of what would become known as the Emerald Nightmare.[5][6][7][8][9]

The stump that was left behind was eventually taken over by the furbolg tribes, who built the settlement that became Grizzlemaw. 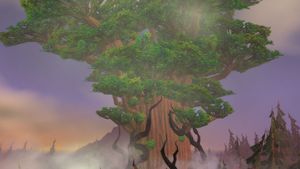 Andrassil as seen within the Emerald Dream. 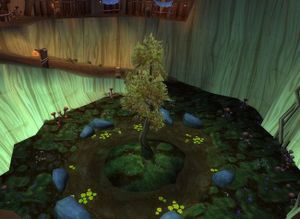 Vordrassil fell to earth in several segments spread across the west-central portion of the Grizzly Hills, where they rooted deep into the ground. Foul oozes surround these segments, known as Vordrassil's Heart, Vordrassil's Limb and Vordrassil's Tears. A corruptive darkness resides in the depths. The corruption also spread to the furbolgs in Grizzlemaw itself, and it was there the Alliance and the Horde began their investigation into what went wrong. Hierophant Thayreen and Windseer Grayhorn sent Alliance and Horde adventurers, respectively, to collect samples of the oozes growing in the three segments, as well as determining the source of the darkness within them. It was then discovered that the furbolg tribes had managed to resurrect the great bear Ancient Ursoc, killed during the War of the Ancients ten thousand years earlier; however, Ursoc's children, Orsonn and Kodian, recognized that their father had been corrupted in the same manner as the furbolgs who restored him, as their blood was tainted with the same darkness as found in the oozes around Vordrassil's shattered remnants.[8]

The trail thus led into Grizzlemaw itself, where the furbolg were using seeds left over from Vordrassil's destruction to regrow the tree within the great stump. The adventurers were tasked with burning the sapling growing within its depths and collecting the ashes, as well as collecting Vordrassil's seeds to prevent the furbolg from regrowing it again.[9][10] Once the ashes were purified, they journeyed to Ursoc's Den to confront the corrupted Ancient. After defeating him and sprinkling Vordrassil's ashes on his corpse, the freed spirit of Ursoc appeared and revealed the influence of the Old God Yogg-Saron, warning that his influence stretched beyond Vordrassil's roots.[11]

Within the Emerald Dream, Andrassil stands tall even as the Emerald Nightmare corrupts the rest of the area.[12]