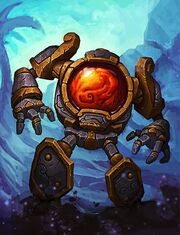 Anima is what empowers the blood golems of the Isle of Thunder.

“Magic that could remake a thing so completely came from the dawn of time, from the beginning of everything. The titans, the shapers of Azeroth, had used such magic in their acts of creation.”

Anima is life energy harnessed and condensed into liquid form.[2] This vital fluid[3] has been used by the mogu to shape life since the time of the Thunder King. Before that, it was originally used by the titans and their titan-forged Keepers.

The earliest known use of anima dates back from the ordering of Azeroth, when the titans, the shapers of Azeroth, had used such magic in their acts of creation.[1] When Lei Shen defeated Ra and ate his heart, he gained not only his power as keeper of storms, but the knowledge to utilize the Engine of Nalak'sha and anima in a method called flesh-shaping. The newly crowned Thunder King used anima in the creation of mighty constructs called blood golems and the shaping of life forms, such a slave races like the saurok or yaungol.

During the Throne of Thunder raid, a large system of anima flowed into the Saurok Creation Pit, home of Primordius. This anima mutated adventurers into a temporary saurok-like evolution. After the fall of the Thunder King, adventurers encountered the Fallen Keeper of Storms, Ra, underneath the Throne of Thunder. Ra demonstrated that he still had power over anima and used it offensively during his battle.

The Regent Lord of Quel'Thalas, Lor'themar Theron, acquired an anima golem to study, hoping to learn its secrets.[4] The blood elves then used them to help purge the demonic corruption in Talador and to defend Auchindoun during the war in Draenor, and to fight alongside the Blood Knights' forces and the Nightfallen rebels in Suramar during the Nightfallen rebellion.

In the Throne of Thunder, Ra's wounds appear to reveal anima beneath them. This suggests that anima may be Ra's blood, and that Lei Shen kept him alive to drain him of it.