Not to be confused with Arkkoran. 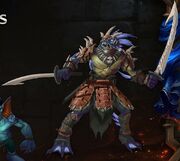 The ankoan (sometimes pluralized as ankoans) are an ancient species of deep sea warriors that traverse the deepest and most dangerous parts of the ocean.[1] Over the generations, they have been nearly hunted to extinction by the naga. So few of them remain[2][3] that they know they can never rebuild their tribe's population, and those who remain have dedicated their lives to slaying naga.[2][4]

The ankoan are an offshoot of the jinyu who left Pandaria a long time ago. Now their clans hunt in the depths of the ocean.[5] They have been nearly hunted to extinction by the naga. The Waveblade clan has been fighting back against the naga for generations. However, they have recently taken the fight directly to the naga's doorstep in Nazjatar after their former leader was slain by Queen Azshara, and the Waveblade swore an oath to avenge them.[6] The Waveblade clan was the only ankoan clan to take the fight directly to Azshara in Nazjatar.[7] When Alliance forces arrived in Nazjatar, they befriended the Waveblade while the Horde allied with the Unshackled.[2][4] The Unshackled leader Neri Sharpfin views the ankoan as impressive fighters but a bit standoffish.[8] Since arriving in Nazjatar, the ankoan have taken up residence in Mezzamere.

The ankoan are a nomadic race of fierce hunters.[10] They have a natural affinity for the sea, so training local wildlife like waverays was a natural strategy in their battles against the naga.[11] Ankoan believe the spirits of their ancestors continue to watch over them after death.[12] To honor their dead, the ankoan place wooden burial shrines over their graves. However, the names of those who have died a dishonorable or cowardly death are purposefully forgotten.[13] The ankoan worship Neptulon.[14][15]

Long ago, ankoan children would fill empty spider crab shells with sand and then hang them on the corals as decoration.[16] Large swarms of deep sea frenzies are apparently one of the most horrific dangers in the deep sea that ankoan and naga alike fear, their numbers blotting out all light and devouring all unhidden flesh.[17]

The ankoan may be descended or related to the Razorfin tribe of jinyu who left Pandaria a long time ago.